National average spot rates were the highest in June they’ve been since January, when the spot market was first adjusting to the ELD mandate. 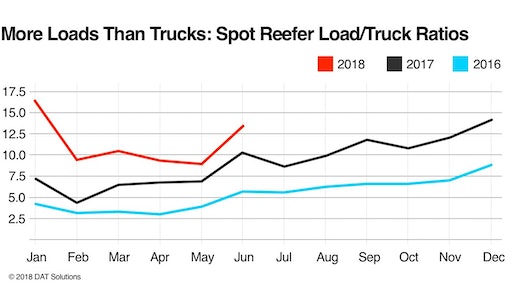 Truckload capacity tends to tighten during the first week of June, when the annual Roadcheck truck and bus inspection blitz is held across North America. On average, 17 vehicles are inspected every minute, and one in four is found to have at least one out-of-service violation.

This was the first Roadcheck event with the ELD mandate in full effect, and not coincidentally, inspectors were focused on hours-of-service enforcement. Some truckers took a mini-vacation that week.

For instance, the number of available loads on DAT load boards was up 27 percent during the first week of June compared to the previous week, which included the Memorial Day holiday. That’s in line with expectations when you compare a five-day workweek to one with just four business days. Even with the extra day and 27 percent more available loads, the number of truck posts was unchanged week-over-week.

As a result, national average spot rates were the highest they’ve been since January, when the spot market was first adjusting to the ELD mandate.

By mid-June, spot rates were on track to achieve their highest-ever monthly average. Refrigerated loads averaged $2.70/mile, and there were 12.6 available spot loads for every available truck. Those are national averages—the demand for trucks is higher in areas where produce harvests are coming online.

As we head deeper into the summer, it appears that the capacity crunch isn’t due to truckers taking a holiday. Shippers just have a lot of freight to move—and carriers are getting top-dollar to do it.