Survey Says: Carriers Are Using ELDs, But at a Cost 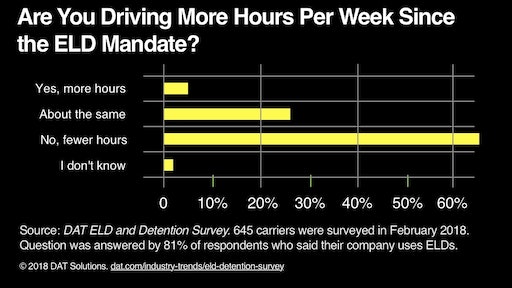 April 1 marked the end of the “soft enforcement” on the federal ELD mandate, meaning that operating without a legal device can now result in an out-of-service violation.

There were concerns that enforcement might prompt carriers to leave the industry in droves, but a funny thing happened on the way to the deadline: the vast majority of carriers that must comply with the rule seem to be doing so.

In a DAT survey of 645 carriers conducted in February, 91 percent said they either run with an ELD (81 percent) or are exempt from the mandate (10 percent). It’s worth noting that owner-operators—small businesses that are hit hardest by the cost to buy, install and use ELDs—made up 93 percent of the survey respondents.

While carriers may be using ELDs, many still aren’t happy about it. Sixty-seven percent of survey respondents said they drive fewer miles than they did before installing the devices, and 71 percent are making less money.

Furthermore, drivers are having trouble finding parking when the ELD tells them it’s time to stop and rest. Nearly 87 percent said it was “harder” or “much harder” to find parking since the ELD mandate took effect in December 2017.

Finally, shippers overall haven’t done enough to mitigate delays during loading and unloading. More than 77 percent of carriers reported that their drivers are being detained for more than two hours on at least one out of five loads. ELDs make these events transparent, whereas previously they could be edited away with paper logs.

In turn, many carriers are being more selective about their customers. While the grace period has ended for carriers and drivers, it’s also over for shippers who make it hard for truckers to get their work done within their allotted time.