This time last year the truckload freight market was settling into a typically softer Q1 pattern. 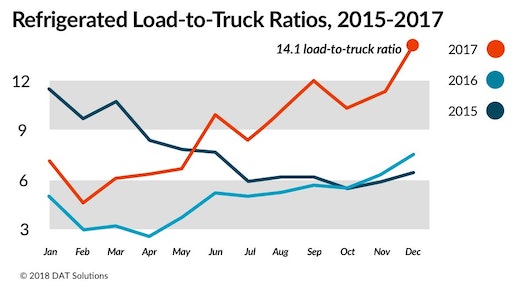 In January 2017, the national average spot line-haul rate for reefer freight was $1.70 a mile compared to the average contract rate of $1.86. There were 7.3 available reefer loads for every truck posted on DAT load boards—a little high for January but not abnormal—and the load-to-truck ratio was trending downward like it almost always does going into February.

For all intents and purposes, 2017 was off to a lackluster start. It ended, however, with record freight rates and extremely tight capacity. Some highlights:

Today those crazy-high ratios and rates have started to settle into a more normal pattern. But watch out, things looked pretty unremarkable at this time last year.