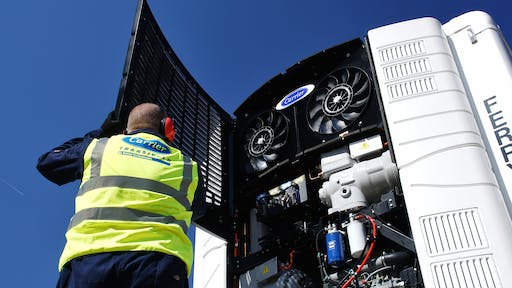 The never-ending quest for absolute cold chain integrity. It's the daily pursuit that underpins the fruit, vegetable and fresh meat industries.

It also happens to be the sweet spot for specialists in the refrigerated truck and trailer sector, who continue to improve not just their cooling systems' abilities to bring temperature down quickly after pickups and dropoffs, but are also making dramatic strides in developing "green" systems while improving access and loading capabilities.

The unit is the first of three that will be incorporated into Sainsbury's fleet this year, and are part of a three-year technology field trial. The assessment follows a 2013 pilot program in which the supermarket deployed a modified version of its overland NaturaLINE refrigeration system in its ocean containers.

The prototype incorporates technology from the NaturaLINE refrigeration system into a traditional Carrier Vector unit chassis.

Like the Vector unit, the prototype will rely on the E-Drive™ all-electric technology.

David Appel, president of Carrier Transicold & Refrigeration Systems, described the delivery of the prototype as "a huge milestone in the development of over-the-road refrigeration using CO2.”

“Our ultimate vision is to see temperature-controlled units running on natural refrigerant in mainstream production," he said.

Thanks to  Sainsbury, he said, "we are one step closer.”

At the same time, Carrier Transicold has been increasing its market share in Europe, most recently with Fraikin Poland's purchase of 75 new temperature-controlled vehicles to add to its rental fleet.

All three units have solid reputations for their versatility in over-the road situations and their ease of use – the very qualities a company like Fraikin Poland needed considering its diverse fleet comprised of trucks (making up 70 percent of its 626 vehicles), vans (22 percent) and semi-trailers (8 percent).

"We have a very robust portfolio, including refrigerated transport, which is very demanding, especially the distribution of pharmaceuticals and seafood,” said Artur Nowicki, managing director at Fraikin Poland.

All of which is not to suggest that Carrier Transicold is the only cool transport sector player on the grow or that Europe is the world's only robust market.

The Obama administration's effort to scale up the adoption of renewable and other green technologies, and other steps to address climate change, couples with more stringent air-quality regulations like those enforced by the California Air Resources Board. These initiatives have created a booming market for lighter trucks with more efficient technologies.

It is fitted into a Wabash National Corporation’s all-composite reefer body.

The American Midwest is also where Thermo King has begun work on greatly expanded manufacturing facility in Wichita, Kan. It is expected to move into the 20,000-square-foot building next year.

But that's not all. When Mercedes-Benz USA Vans broke ground on a $500 million Sprinter manufacturing plant in South Carolina in late July, it revealed that Thermo King will be a key partner as it seeks to expand on its already undeniable success in the North American market.

Over the past five years, Mercedes-Benz Sprinter has experienced five consecutive years of record growth in North America, and in 2015, Mercedes-Benz USA Vans sold 28,500 units in the U.S., an 11 percent increase from 2014.

With the dramatic expansion of the manufacturing in the Palmetto State, it will offer the cold chain community Thermo King refrigeration in both its Metris and Sprinter vans.

According to company officials participating in the groundbreaking for the new plant, the Metris refrigerated van will be particularly well suited for farm-to-table, flower and beverage delivery applications.

The Sprinter version can be fitted for refrigerated, frozen and deep-frozen options, depending on the application, and allows for 3,300 to 4,000 pounds of cargo.

On the international front, Thermo King has begun distributing insulated bulkheads in the Australian market with Randall Manufacturing.

The goal, officials at Thermo King Australia say, is to provide its customers with insulated bulkheads that not only protect the integrity of shipments, but also ensure they are getting the maximum output from their Thermo King units.

The bulkheads officially went on sale in July through dealers in New South Wales, South Australia, Western Australia and Queensland.

One company that seems particularly well suited to meeting the demands of the new, climate-conscious regulatory regime is Great Dane, which expressly markets its Everest TL as "the industry's lightest weight reefer."

Indeed, "lightweight" is an adjective that applies to almost all of the Everest TL's many noteworthy features.

From its roof construction to its lighter weight walls to its suspension, the trailer has been engineered to minimize weight in every way possible. In addition, the company says, its modular panel foaming process and interior lining are consistent, and are light weight without sacrificing durability.

Other lightweight cold transport solutions offered by the company include the Everest SS reefer, which is created particularly with the long haul truckload carrier in mind, and the highly versatile Everest CL, which can be divided into as many as three distinct temperature-controlled compartments, and features an ambient section that can be configured to accommodate the diverse needs of the cold chain end customer.

A critical component of all three is Great Dane's patented ThermoGuard technology – a multi-layered insulation design incorporating a metal barrier layer within a composite envelop that the company designed to ensure the thermal integrity of the trailer throughout its supply chain life.

But Great Dane in not standing still. A specialist in customization and continuous improvement, the company is responding to its varied demands for more and better, both in regard to trailer aerodynamics and the deployment of telematics – the use of information technology to monitor and control shipment conditions, no matter what the distance.

Not to be outdone, Utility Trailer Manufacturing Company, the United State's oldest privately owned trailer manufacturer, has been on a growth tear of late, opening manufacturing facilities and dealerships at an impressive clip in Minnesota, Arkansas, Florida, Iowa and other states.

Founded in 1914, the company's best-selling refrigerated trailer is its 3000R, which utilizes what the company describes as a "foam-in-place" insulation process.

Because it foregoes the use of pre-foamed panels in manufacturing the 3000R, the company opts instead to outfit its trailer with continuous high-pressure foam. Utility Trailer Manufacturing says its customers can rest assured that the environment they are transporting their fragile cargo in is 100 percent void free.

"No gaps, no voids, no worries," the company says in its literature.

It also offers a customizable 3000R multi-temp model that can incorporate a variety of options matched to the customer's specific needs.