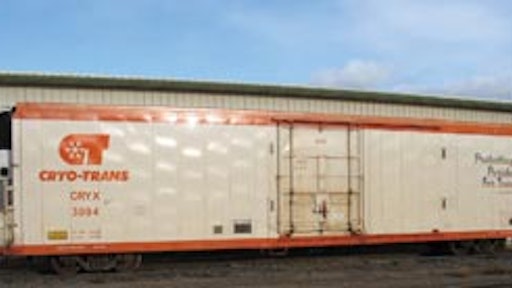 For the last year, each and every French fry and 90 percent of all hash browns served in a McDonald’s restaurant from Baltimore to Richmond, VA, made its way by rail—and it’s led to huge savings for the company that delivers them there.

The Martin-Brower Co, has distributed everything but the buns to 635 McDonald’s restaurants in the Washington metropolitan area from its facility in Manassas, VA, since 1979. The distributor has eliminated millions of dollars in transportation costs by switching all inbound shipments from McCain Foods’ frozen potato processing plant in Portage LaPrairie, Manitoba, Canada, to rail.

"With current truck rates, the driver scarcity and fuel prices all going up, we needed a way to limit those expenses," says Todd Hopkins, manager of the 100,000-square-foot Manassas facility and Northeast area vice president for Martin-Brower.

Moving to rail has resulted in fixed transportation costs over the 2,000 mile run from Manitoba to Manassas.

Hopkins first began experimenting with rail for inbound shipments about five years ago, but 2006 was the first year that it has dealt exclusively in rail for frozen fries and hash browns, its two highest-volume products. The warehouse moves about 2 million cases of the products each year.

In today’s transportation climate, shipping by rail can save between 25 percent and 30 percent in shipping costs compared to over-the-road transportation, depending on the distance traveled, according to Robert Plain, director of marketing and sales in the agriculture and consumer products segments at Norfolk Southern, one of two rail lines that pull the railcars for Martin-Brower. Canadian Pacific Railway brings product from Manitoba to Chicago; Norfolk Southern picks it up there and brings it the rest of the way.

Cryo-Trans Logistics, based in Owings Mills, MD, leases 51 dedicated frozen rail cars to Martin-Brower for the run. Currently, Martin-Brower is using 64-foot railcars, but starting in January the distributor will move to 72-foot cars. "We’ll be trading out for bigger cars that hold about 50 more loads," says Hopkins.

Martin-Brower currently receives two railcars per day, six days a week. One car holds about a day and a half of inventory.

Getting Ready For Rail
Getting to the milestone of 100 percent rail traffic on these items was no easy task. Committing to rail was a huge risk that required a lot of initial capital outlay. Once started, the project could not discarded.

Before the railcars could start rolling in, Hopkins had to modify the distribution center and devise a system to more closely manage inventories to keep a smooth flow of product coming in. He also had to perform a significant amount of maintenance on the rail spurs that abated the property. Those lines hadn’t been used in 15-20 years and needed a lot of work. Then there was the issue of railcar availability, as most U.S. and Canadian carriers did not offer refrigerated railcars. McCain even had to revise its packaging to better accommodate the alternative transportation mode.

When all the partners and modifications were in place, the first shipments started in late 2001. Initially, rail shipments represented less than half of the volumes moving in the lane. "I wasn’t happy with that because I had made a huge investment in rail," recalls Hopkins.

He set a goal of 80 percent by rail, and reached it in the second year. By the third year, 87 percent of shipments in the lane were moving by rail. It took two more years to get it to 100 percent. Few thought it possible.

"Skeptics in the industry felt rail was not a way to move food," says Herman Haksteen, CEO of Cryo-Trans, "and 20 years ago, the instability of rail did not work in the food industry."

Dright Price, director of sales and marketing at Cryo-Trans, agrees. "The penetration of rail in the food industry is still such a small percentage," he says. "Rail is such a huge diversion from what the industry normally does."

Nationwide, food represents about 5 percent of all products shipped by rail, but the numbers are increasing. In fact, Cryo-Trans alone maintains a fleet of about 1,000 railcars that haul fresh and frozen items, produce, dairy products and more.

McCain Foods, which is based in New Brunswick, Canada, has been using rail for the last five years and now makes it a prerequisite that any third-party logistics provider with which it deals must be rail-accessible. The company owns 150 railcars on its own.

"It’s safe to say that there are millions and millions in savings and efficiency," says Haksteen. "There are a lot of long-term benefits."

With rail, Hopkins also has greater visibility into product movement. The Cryo-Trans railcars are equipped with two-way GPS systems, allowing all the parties involved to locate cars at any time, monitor temperatures inside the car, track door openings and even log reefer unit performance. The GPS units send signals back to Cryo-Trans every 12 hours, but anyone can ping the units at any time for up-to-the-minute data.

Then there are the environmental and traffic impacts of taking trucks off the road. "The traffic situation in the [Washington] area is unbelievable at times," says Hopkins. "We have a responsibility to the community to limit the amount of traffic."

"What Martin-Brower has been doing is an opportunity for us to invest in new markets," says Norfolk Southern’s Plain. "It’s a great opportunity, a growing opportunity for us. We are absolutely committed to it and would like to see it expand even further."

Rich Hartzell, a plastics and food products account manager at Canadian Pacific, agrees. "With rail, there are real success stories," he says.

In England, Wal-Mart’s ASDA chain celebrated the fifth anniversary of its pioneering train service that transports groceries, general merchandise and clothing from distribution centers in the Midlands to stores in Scotland. The daily service has clocked up more than 22 million miles since it was launched in 2001.

By switching more of its freight to rail, ASDA estimates it has reduced the overall number of road miles traveled by its fleet transport by around 5 percent, and is on course to reduce the amount of carbon it produces by 80,000 metric tons by the end of 2008.

The ASDA train started running from Lutterworth, Corby and Brackmills depots in 2001 via the rail terminal at Daventry to a terminal in Grangemouth, Scotland. Since then, ASDA has sent an average of 26 containers per day north, eliminating 20 million road miles.

In 2004, the supermarket retailer also began running trains from Grangemouth to stores in the Aberdeen area, saving two million additional road miles.
According to Ian Bowles, environment manager at ASDA, the company has cut the number of company trucks on the road significantly since 2001.

This year we went one step further and opened a deep seaport facility in Teesside, cutting a further 1.5 million road miles by shipping goods directly to the north by sea rather than via southern ports like Felixstowe,” he says.

ASDA has a policy of collecting products from its suppliers on return trips from its stores to its depots, saving 500,000 road miles each year. In addition the 750 trucks used in ASDA’s fleet distribution network have been converted to run on a bio-diesel mix, reducing carbon tail pipe emissions by 3 percent. Each truck is less than four years old, making the fleet one of the most fuel efficient on U.K. roads.

“As part of our on-going efforts to minimize CO2 emissions, we’re also seeking planning permission to install two-mega-watt wind turbines at our depots. We aim to have five sites fully operational by the end of 2007 positioned across the U.K.,” Bowles adds.

ASDA is also working with Yorkshire Forward and the U.K. Carbon Trust. A “Carbon Club” has also been established with 11 major suppliers to identify opportunities to reduce energy consumption and increase energy efficiency in its supply chain.