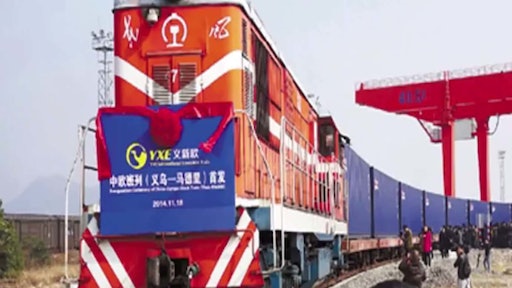 The Yixin'ou cargo line completed the trip from China to Spain in four months.

The first train to complete a journey on the world’s longest railway line, connecting Spain and China, has returned home, according to The Independent, based in London, U.K. The 16,156-mile round trip on the new Yixin’ou cargo line through China, Kazakhstan, Belarus, Poland, Germany, France and Spain took four months. The train arrived laden with cheap goods and returned to China with expensive olive oil.

The 82-container cargo train began its journey in November in the eastern Chinese city of Yiwu. Packed full of Christmas trinkets and decorations, stationery and craft products, it arrived in Madrid on Dec. 14, in time for the thousands of small shops and Christmas markets to stock up on the cheap Chinese goods.

Before the Yixin’ou line was opened, goods traded between Europe and China depended on inefficient sea or air transport, meaning higher prices in Europe.