The credit crunch has resulted in new products that help keep goods moving. 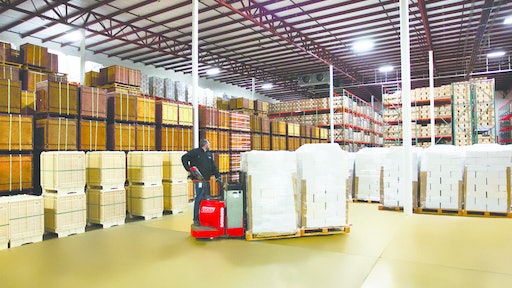 More than 500 million pounds of cheese are handled annually by WOW Logistics.

The past four years have been tough on trade finance. Tougher qualifications for lenders and borrowers alike have taken shape since the global financial crisis in late 2008, and while things looked like they might turn around ever so slightly, along came the euro zone crisis, which seems to have pushed access to trade finance backwards.

But, it’s not all doom and gloom. Third-party logistics providers and global transportation providers, among others, are helping to fill the void for their customers with some very creative financing programs.

WOW’ing them with dairy trade finance

Unlike other products that are rushed to market as soon as they’re manufactured, cheese products, in particular, undergo an aging process that in some cases can exceed 10 years or more. That’s a long time to tie up capital, which was the dilemma that became the brainchild for a dairy trade finance program launched by WOW Logistics in 1997.

According to Howard Kamerer, president and CEO of the Wisconsin-based third-party logistics company, a nationally known cheese customer who was looking for ways to free up capital to reinvest in the company got executives at WOW thinking about how to help. It was then that the dairy trade finance program was born.

WOW’s program differs from a traditional lender, like a bank, in several ways, says Kamerer. “This is not a loan. We actually buy the cheese when it’s made. The customer pays for the cheese when it comes out of the program,” and that could be anywhere from several months to several years.

“The other advantage is that qualifying for the program is fairly easy,” says Kamerer. We evaluate the customer’s credit worthiness and work with them to come up with a solution for their business need. Customers pay simple interest, not a compounded interest rate, and they don’t have to make a monthly, quarterly, or annual payment.”

One of the biggest benefits is the way the program allows customers to manage costs. For example, “Let’s say you’re a cheese maker and you’re making two-year-old cheddar. You can take the costs of making the cheese (the ingredients, etc.), the transportation costs, the handling and storage costs, and you can calculate what that cheese is going to cost after it’s aged for two years,” explains Kamerer. “Then, you can approach your customer and put a contract in place before the cheese comes out of the program. You can forecast costs and you can defer them.”

Kamerer says most of WOW’s customers use the dairy trade finance program at some point. Currently, WOW is holding over 200 million pounds of dairy products, both financed and non-financed. Customers range from some of the largest dairy producers and marketers in the U.S. to small, family-run cheese production facilities. And, as far as Kamerer knows, there’s no one out there with such a complex and comprehensive dairy trade finance program, although some other companies are providing “portions of an aging program like ours.”

The program has become so popular that WOW is rolling out an off-site version of their dairy trade finance program. “It’s been a little more difficult to put together because it’s obviously more challenging to control quality at an off-site location, but we are planning to roll it out in late September,” says Kamerer.

Goods in transit, no problem

As manufacturers’ and importers’ supply chains have extended further overseas, the impact on their cash flow has become more pronounced. Just the ocean transportation alone from Asia to North America can add up to three weeks—that’s money literally sitting on the water.

UPS Capital’s Global Asset-Based Lending provides a revolving line of credit to its customers, advancing funds against the value of goods that are in a foreign warehouse or in transit.

To qualify for the program, UPS Capital requires its customer to be U.S.-based; import finished goods; have an annual revenue of $15 million to $500 million; and the goods must be collateralized within the UPS network.

Some of the benefits include access to funds earlier in the supply chain, improved supplier relationships, and the reduction or elimination for Letters of Credit.

Are Purse Strings Getting Tighter Again?

Blame it on problems in the euro zone if you’d like, at least that’s part of the reason trade finance is starting to dry up again.

But, the financial turmoil in the euro zone is taking its toll and European banks are retreating.

“One reason for this withdrawal is that international trade takes place in dollars, and risky-looking euro zone lenders are finding it harder to access dollar liquidity,” stated The Economist earlier this month. “Another is the need for European banks to slim their balance sheets: trade finance, because of its short-term nature, is easy to prune. Many lenders are also under pressure to concentrate their activities on domestic markets. The likes of HSBC can pick up some of the slack left by departing Europeans. Japanese banks, and local banks in China and Brazil, are also moving to fill gaps. But, trade finance is likely to be less abundant than it was.”

Indeed, while European banks have historically figured prominently in trade finance, according to analysts at Morgan Stanley, lenders in the euro zone (excluding Germany) accounted for only 3 percent of trade finance during the first quarter of 2012.

An article in The Wall Street Journal from September 3 quoted a French banker as saying: “The French banks are regrouping. This is not just cyclical. It’s a structural change.” What’s more, the same article cited a survey of more than 130 emerging market banks by the Institute of International Finance, which found that credit standards have tightened in Asia for the past six quarters.