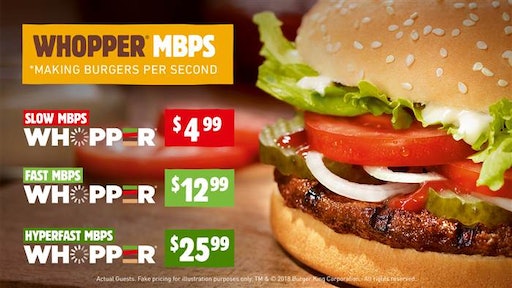 The Federal communications Commissions repealed Net Neutrality in December, allowing internet providers to speed up, slow down or block any content they desire. Previously, all content was treated as equal, and the repeal could have customers paying substantial amounts to get what was previously offered to them.

Burger King decided to take a stance against the repeal by reenacting it with real customers.

Employees explained to the customers that if the restaurant was able to make money off of other items on the menu, so they’re slowing down their process of the Whopper.

After seeing the commercial, customers took to social media praising the restaurant chain for what they did.

This is the best thing Burger King has done on the internets since Subservient Chicken.

“We believe the internet should be like Burger King restaurants, a place that doesn’t prioritize and welcomes everyone,” Fernando Machado, Burger King's global chief marketing officer said in a statement issued to TODAY Food.