Spot truckload rates may pick up before Thanksgiving, DAT reports, as retail sales are projected to grow by 6 percent this holiday season. 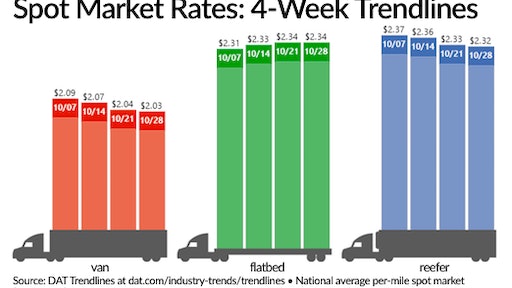 The availability of spot truckload freight dipped 1.8 percent, while the number of trucks posted fell 2.4 percent during the week ending Oct. 28, reported DAT Solutions, which operates the DAT network of load boards.

National average spot van and reefer rates declined for the third week in a row, while the flatbed rate held steady after nearly two months of steady gains. Rates remain elevated for this time of year for all three equipment types:

Spot truckload rates may pick up before Thanksgiving, DAT reports, as retail sales are projected to grow by 6 percent this holiday season, and demand for capacity is solid.

Volumes for the top van markets rebounded 5 percent last week as shippers moved freight out the door before month’s end. Nationally, van load posts increased 1 percent, and truck posts declined 3 percent, which caused the van load-to-truck ratio to increase from 5.4 to 5.9 loads per truck. In line with seasonal expectations during October, van load-to-truck ratios have declined since hitting a peak of 7.0 loads per truck during the final week of September.