The conference was held at the Hyatt Regency Grand Cypress Resort in Orlando on Feb. 23-26. 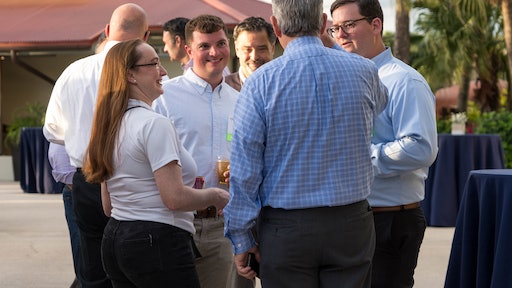 Joe Theismann, former star quarterback for the Washington Redskins and inspirational speaker, kicked off the Refrigerated Foods Association’s Annual Conference, which included approximately 250 attendees from across America and Canada. Joe’s message was incredibly personalized, after he took the time before the conference to tour St. Clair Foods’ plant with Conference Chair Lauren Edmonds, and met with conference attendees at both the Welcome Reception on Sunday and breakfast on Monday morning.  Joe related his experiences on and off the field with the trials and tribulations of managing a ready-to-eat food business.

Other presenters and topics included Director of Business Development of Dot Foods, Park Plank, who spoke on “Freight, Logistics and Transportation”; Brett Bauer, Dan Burke and Jeanna Madlener of Woodruff Sawyer who discussed “Business Continuity and Risk Mitigation for the Food Industry”; Josh Oleson and Weldon Williams who addressed “Sustainability Trends in Packaging”; Jean-Yves Durocher of R3D International who spoke on “Digital Manufacturing of the Future”; and a critical Technical and Regulatory Update from RFA Technical Director, Martin Mitchell.

The Conference was held at the Hyatt Regency Grand Cypress Resort in Orlando, FL on February 23-26, 2020.  In addition to the timely presentations, the Conference also included outstanding networking opportunities and social events, including a service project that provided 400 kids’ packs for Second Harvest Food Bank of Central Florida. The annual Golf Tournament allowed avid players a chance to enjoy networking and beautiful weather at the resort’s premier course.  Suppliers displayed their wares and presented money and time saving opportunities at the Tabletop Reception and during the One-on-One CEO Sessions.  The closing banquet and anniversary celebration was particularly special, taking place at Universal Studios.  Past Presidents and other honorary attendees were recognized at the 40th Anniversary Party.