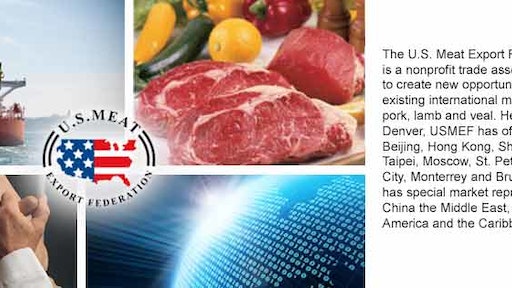 August was a strong month for U.S. red meat exports as beef export volume was the largest in nearly two years and both beef and pork exports posted the highest monthly values of 2016, according to statistics released by USDA and compiled by the U.S. Meat Export Federation (USMEF).

There's finally some good news for livestock producers in the United States.

Meat exports in August surged as the nation experienced year-over-year increases in beef, pork and lamb exports in terms of volumes and value for the month, according to data provided by the U.S. Department of Agriculture, which was compiled by the U.S. Meat Export Federation (USMEF).

Meanwhile, the U.S. exported 186,689 metric tons of pork valued at $512.8 million in August, year-over-year increases of 16.2 percent and 19.3 percent, respectively, thanks to significant increases in pork exports to Korea, Japan, China/Hong Kong and Mexico. During the month, Mexico was the leading volumes market for U.S. pork exports at 64,620 metric tons, while Japan was the leading value market at $151.2 million.

“U.S. livestock producers deserve some good news in what has been a tough year, and this upward trend in exports is very encouraging,” USMEF President and CEO said Philip Seng. “Currently U.S. beef and pork are very competitive, as the production of our key competitors – Australia and the European Union – has moderated and prices have jumped. As U.S. competitiveness continues to improve, we remain optimistic that exports will maintain positive momentum through the end of this year and into 2017.”