The TPP Agreement would provide positive benefits for the U.S. food and agriculture sector, primarily through new export market access in Japan and Vietnam—two countries where the agricultural sectors are currently protected by high tariffs. 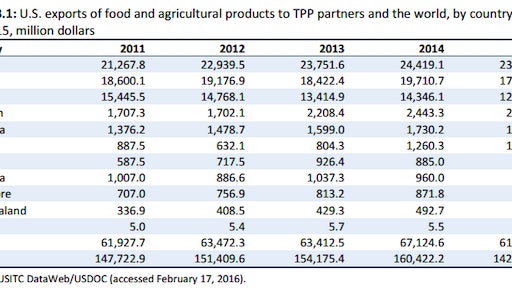 The increase in export opportunities as a result of additional access to TPP markets would outweigh the effects of the new access the United States would provide to TPP partners, the report notes.

Twelve nations have already signed the TPP agreement, but both the United States and Japan need to ratify the deal, which will set common standards on issues ranging from workers' rights to intellectual property protection in 12 Pacific nations.

The TPP Agreement would provide positive benefits for the U.S. food and agriculture sector, primarily through new export market access in Japan and Vietnam—two countries where the agricultural sectors are currently protected by high tariffs. The increase in export opportunities as a result of additional access to TPP markets would outweigh the effects of the new access the United States would provide to TPP partners, the report notes. However, export growth in certain sectors, such as horticulture and meats, would likely continue to be restricted by sanitary and phytosanitary (SPS) measures in certain markets.

Editor's Insight: The food industry would be one of the biggest winners from the TPP. Food industry organizations should be making their case more loudly to politicians, given the fact that both of the leading presidential candidates have stated opposition to the agreement. According to a Wall Street Journal story last week, Congress is unlikely to consider the pact before the November election.

The agreement is not a cure-all for every challenge facing the U.S. economy, and the recent report notes that the overall impact on the economy will be small. Nevertheless, the impact will be positive. It will create jobs and secure futures for many U.S. workers.

The food industry needs to work harder to let politicians know that this trade agreement, while not a cure-all for the economy, will put more people to work and create badly-needed tax revenue. 5-23-16 By Elliot Maras