In an executive order, Gov. Brown said the state has set “aggressive targets for reducing pollution” by 2030, including decreasing greenhouse gas emissions and cutting petroleum use in automobiles by half. 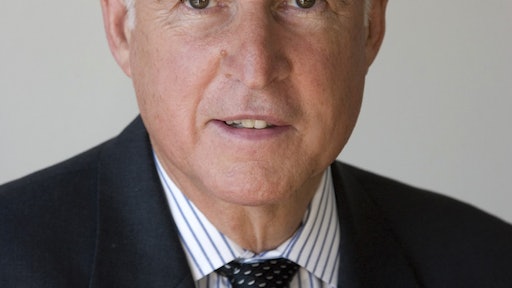 California Gov. Jerry Brown called on state leaders Friday to develop a plan to transition to zero-emission technologies in the freight industry, according to The Wall Street Journal.

In an executive order, Mr. Brown said the state has set “aggressive targets for reducing pollution” by 2030, including decreasing greenhouse gas emissions and cutting petroleum use in automobiles by half.

He ordered more than half a dozen state agencies to “develop an integrated action plan by July 2016 that establishes clear targets to improve freight efficiency, transition to zero-emission technologies, and increase competitiveness of California’s freight system.”

That will mean big changes for freight businesses in California, one of the nation’s top gateways for international trade. Freight transport operations in the state—from ocean port complexes to trains and trucks (the primary mode of freight transport)—already face some of highest environmental standards in the country.

In a statement, the California Trucking Association said the state’s truckers are spending a billion dollars a year on reducing emissions and the industry has invested $7 billion on clean truck technology, “equivalent to taking 1.4 million cars off the road,” in recent years.

“As the State contemplates more costly new emissions targets, it must consider the economic impact to the trucking industry,” the association said.

Editors Insight: Clearly Gov. Brown does not keep up with the investment the transportation industry has made in reducing greenhouse gas emissions and in increasing fuel efficiency. Be that as it may, the California Air Resources Board (CARB) carries a lot of weight in setting environmental rules, not just for California, but for the country. The transportation industry needs to make Gov. Brown understand there is only so much that can be done for the time being.

According to CALmatters, a non-profit journalism venture that covers California policies, California officials do not know how much their climate rules have cost or saved so far. CARB stated last year that the existing law’s impact on economic growth remains unknown. But that doesn’t stop Gov. Brown from calling for more emission reduction targets.

The transportation industry has to make Gov. Brown understand that demanding the industry develop zero emission vehicles faster will only serve to add cost to the vehicle production process, which gets passed on to the cost of vehicles.

And no matter how many emission reducing technologies are developed, it takes time to integrate them into vehicle designs and even more time for vehicle fleets to add these vehicles.

The transportation industry has a big public relations job on its hands. 7-22-15 Elliot Maras

Editor-in-Chief Lara Sowinski replies: Admittedly, the transportation industry in California is required to meet some of the strictest emissions standards in the nation. However, the clean air goals adopted by the ports of LA/LB and Oakland prove that significant reductions in GHG emissions are achievable, particularly when technology advancements are moving so quickly.

In 2006, the APL Singapore showed off a bunker emulsification technology that injects water into the vessel’s bunker fuel to cut nitrogen oxide emissions by up to 20 percent. Meanwhile, yard equipment at the seaports and ICTF’s are increasingly fueled by electricity instead of diesel. And, electric gensets for refrigerated trailers—already common in Europe—are starting to gain traction in the U.S.

I support Gov. Brown’s efforts to develop zero emission vehicles and I think the timelines are reasonable. As the saying goes, “Necessity is the mother of invention.” Most people agree climate change is real and the consequences catastrophic if we don’t adequately address it. The transportation industry should—and can—continue to lead in this area.