Several locations in Connecticut, Maine, Massachusetts, New Hampshire, Long Island and Rhode Island have picked up over two feet of snow, while amounts in New York have ranged from 9.8 inches at Central Park in New York City to 30 inches on Long Island. 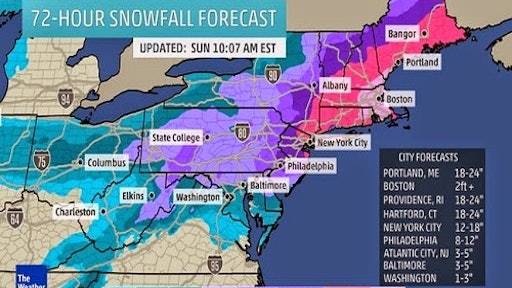 The storm is now winding down. The National Weather Service has dropped all winter storm and blizzard warnings for Juno.

Snow amounts in New York have ranged from 9.8 inches at Central Park in New York City to 30 inches on Long Island.

In Massachusetts, up to 36 inches of snow has been measured in Lunenburg, while Boston has seen 24.4 inches. Juno was a record snowstorm for Worcester, Massachusetts (34.5 inches). Incredibly, 31.9 inches fell in Worcester on Jan. 27, alone!

Juno's most severe coastal flooding occurred in eastern Massachusetts, in areas most exposed to north to northeast winds gusting from 50-80 mph, at times.

New York City Mayor Bill de Blasio ordered all non-essential drivers off the city's roads after 11 p.m. Monday and announced that the city's schools would officially close Tuesday because of forecast impacts.

"This will most likely be one of the largest blizzards in the history of New York City," de Blasio said, NBC News reported, as The National Weather Service's blizzard warning took effect at 1 p.m. EST.

The National Weather Service declared a blizzard warning from 1 p.m. Monday to midnight Tuesday local time with a coastal flood watch also in effect. At the time, the agency called Juno's total impact in the region "crippling and potentially historic."

Thousands of flights across the region were canceled in advance of the storm, according to FlightAware.com. United Airlines canceled all flights Tuesday from Newark, Laguardia and New York's JFK airports. Most major air carriers are allowing for free flight changes and waivers for Northeast travelers, in many cases, through Friday.