U.S. Secretary of State John Kerry hosted simultaneous receptions in Washington D.C. and Milan, via satellite, to celebrate the groundbreaking for the U.S. Pavilion at the next world's fair. 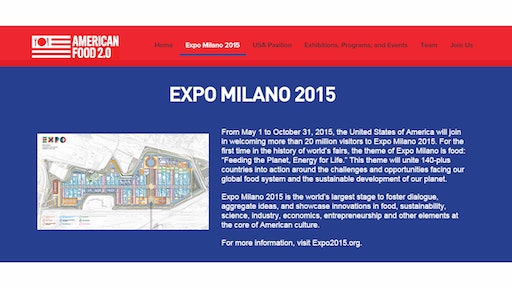 The U.S. Pavilion marks a new magnet, within Milano Expo 2015 in Milan, Italy, for conversation and collaboration to confront global food challenges. U.S. Secretary of State John Kerry hosted simultaneous receptions in Washington D.C. and Milan, via satellite, to celebrate the groundbreaking for the U.S. Pavilion at the next world's fair, which is expected to attract 20 million visitors from May 1 through Oct. 31 next year.

"Innovation is the lifeblood of the United States, and as a global leader in advancing food security, we are eager to seize the opportunity to get involved in the Expo in a major way," said U.S. State Secretary John Kerry during a reception, which was attended by former U.S. Ambassador to Italy David Thorne, incoming Milan Consul General Philip Reeker, and USA Pavilion partners, sponsors and supporters.

In Milan, U.S. Ambassador to Italy John Phillips joined the Commissioner of the Italian Government for Expo Milano 2015 Giuseppe Sala, the Mayor of Milan Giuliano Pisapia and the President of Lombardia Region Roberto Maroni and other partners at the groundbreaking ceremony for the USA Pavilion, whose theme - "American Food 2.0: United to Feed the Planet" - will showcase America's critical role in the future of food around the world.

"American farmers produce one fourth of the world's food, but in order to supply the planet's growing population, we will need to increase global food production by 70 percent by 2050. Thus the Expo's theme-"Feeding the Planet, Energy for Life"-is both timely and poignant. It is also possible. Thanks to technology, innovation and entrepreneurship, America now produces more food-more consistently and more safely-and delivers it to more people at a more affordable price than ever before in history. We will tell this story here, in the Pavilion," stated the ambassador.

Featuring a fully-functioning vertical farm, the Pavilion - designed by award-winning architect James Biber - will celebrate America's rich agricultural history and innovation-driven success with many programs and events, ranging from interactive exhibits and tastings to salons, workshops and innovation accelerators, created by contributions from private donors and partners.

"We rely on public-private partnerships to manage the American participation here. I am proud of this approach. We are grateful to the companies who have already made generous contributions towards the success of this Pavilion, and look forward to welcoming more sponsors, as we continue to put together an incredible team. We look forward to opening the doors of the USA Pavilion to you, and to millions of others, starting May 1st 2015," concluded Ambassador Phillips.

"It is a pleasure to see the Expo site dressed in stars and stripes today and the traditional food truck, which will be one of the key features of the U.S. exhibition space in order to welcome the visitors of the Universal Exhibition of 2015. The United States are ready to officially start working on the construction of a pavilion which, in terms of contents and Visitor Experience, will surely be one of the most attractive and visited," said Giuseppe Sala, the Commissioner of the Government for Expo 2015 and CEO of Expo 2015 SpA.

The Friends of the USA Pavilion Milano 2015, the private coalition responsible for organizing the U.S. presence at the Expo, announced several key partnerships, highlighted by GE. The two companies join a growing list of partners that will support the USA Pavilion and affiliated programming before and during next year's Expo.

"We're thrilled to collaborate with a great panel of sponsors to address food issues on an international stage. The USA Pavilion is committed to representing the diversity of the USA and our collective commitment to solving the challenges of feeding the planet. We invite others to join us," said Jerry Giaquinta, representative of the Friends of the USA Pavilion Milano 2015.

The Friends organization collaboration between the James Beard Foundation and the International Culinary Center, in association with the American Chamber of Commerce in Italy - is seeking partners to represent the diversity, innovation and entrepreneurial spirit that have shaped America's food story, while creating a global call to action around the challenges of feeding the planet.

The USA Pavilion is funded entirely through the generosity of corporations, organizations, universities and individuals. Current partners include GE, Brand USA, Uvet, DuPont, illy, 3M, McKinsey & Company and FleishmanHillard. For more information about the USA Pavilion or to become a sponsor, please visit: http://www.usapavilion2015.net.