As consumers prioritize saving time, effort and money, they are shifting their shopping habits to channels they feel best support them. 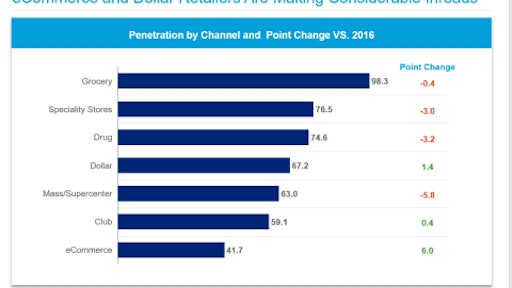 Despite the persistent threat of a recession, consumers remain confident about their financial well-being and are contributing to CPG sales growth, according to IRI’s Q4 2019 Consumer Connect Survey, released today. However, as consumers prioritize saving time, effort and money, they are shifting their shopping habits to channels they feel best support them. In the full report, titled “Channel Trends in CPG Today,” IRI analyzes how this shift is affecting consumer shopping channel preferences and in-store behaviors.

“Despite an atmosphere of economic uncertainty, consumer confidence and outlook remain favorable. The optimism we recorded in our Consumer Connect survey is likely to have a positive effect on sales in the CPG industry, which we expect to continue growing incrementally through 2020, and exceed $886 billion by 2021. That said, certain channels – such as dollar and e-commerce – provide stronger value propositions to customers, and are gaining shopper visits, while more traditional retail channels, such as mass market, supercenters, drug and grocery show declining visits. This suggests that, despite their confidence in the future, consumers are still focused on finding new ways to save,” says Joan Driggs, IRI’s vice president of Content and Thought Leadership.

Read Next: The Impact of E-Commerce on Food & Beverage

IRI’s Consumer Connect Index monitors the current financial health and outlook of consumers, differentiating between the sentiments of various income groups, races and generations. The Q4 report revealed that overall consumer confidence has increased by nearly 1% since the Q4 2018 report, and 1.5% against the data from last quarter, overcoming the threat of recession. Fifty-seven percent of consumers reported that they feel good about their financial health, and 73% expressed confidence that their households’ economic well-being would improve within the next six months. IRI observed the most widespread feeling of financial stability among older generations and high-income households, as well as Asian and non-Hispanic consumers. Millennials and African Americans reported the most widespread confidence that their financial health would improve in the near future.

Shift Toward Convenience and Value

IRI observed that consumer demand for convenience and value is increasingly influential in persuading a consumer to shop through a specific channel and at a specific store. Value retailers, which include dollar stores and e-commerce, have seen 1.4 and 6-point increases in penetration, respectively, since 2016. While consumers still favor traditional channels such as grocery, drug and mass, the penetration in those channels has decreased over the same period, suggesting that they are losing shoppers to other channels. The IRI study also found that, when deciding where to shop, consumers weigh in-store experiential concepts and easy navigation services, as well as price, as heavy motivations for their choices.

“Consumers across the board cited time and cost savings as key drivers of where they choose to shop, which is causing a shift away from the channels that we are used to seeing dominate the CPG space,” continues Driggs. “In particular, we found that heavy shoppers are being attracted to dollar retailers over competing channels, likely because they are looking for ways to save. We expect this will continue to negatively impact sectors like grocery and pharmacy, which have lost their ability to protect and cultivate their core shopper base.”

The ease and value of the dollar channel led consumers to increase the frequency of trips per month and per-trip spending compared to a year ago, relative to competing channels. E-commerce platforms also experienced a greater number of trips, but saw average basket size decrease, as shoppers got more comfortable with the platform and the expectation of quick delivery.

How AI is Checking What We Eat

With the help of automation and AI, manufacturers now have a window of opportunity to inject more intelligence at virtually every level of the food supply.
Neurala
October 18, 2021

E-Commerce Solutions: Are they Worth the Investment?