Nearly a year after its launch, Honey Butter Chip remains a wildly popular and difficult-to-track-down snack in South Korea. 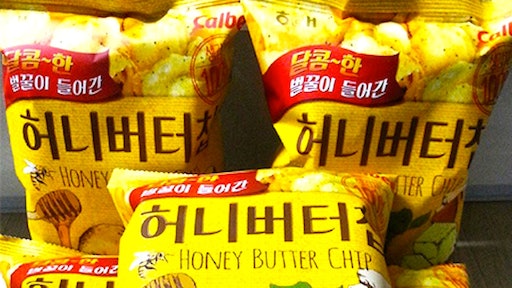 South Korean retailers are rationing a potato chip due to its popularity, according to The Wall Street Journal.

Nearly a year after its launch, Honey Butter Chip remains a wildly popular and difficult-to-track-down snack in South Korea. Some retailers say they have introduced rationing, limiting customers to a few bags to prevent hoarding. Local news media have featured stories of stores trying to prevent fights between customers competing for the snack.

“When we get our weekly delivery, we have folks lining up to buy Honey Butter Chip 30 minutes before we open,” said a security guard at one of Seoul’s big supermarkets.

Potato prices in South Korea have doubled partly as a result of increased demand for the chips. Retailers sell other less-popular products bundled together with the chips. In one deal, used-car dealer SK Encar sold a Fiat 500 online with two boxes of the chips taped to the car door.

Editors Insight: With the capabilities of demand planning software, such a problem should not last long. The challenge demonstrates the importance of connecting sales data with production capabilities. This is a software challenge that many supply chain software companies claim to be addressing.

According to this report, the company had to ramp up to 24-hour production to meet demand.

The manufacturer was caught off guard by social media, which has done more to popularize the product than the company’s own marketing, demonstrating the impact that social media can place on demand and overall supply chain management.

The advent of social media has placed new demands on supply chain management. 7-9-15 By Elliot Maras