The city's program, which is the first of its kind in the nation, allows shoppers to order their groceries online and receive free deliveries at community sites in Baltimore's food deserts. 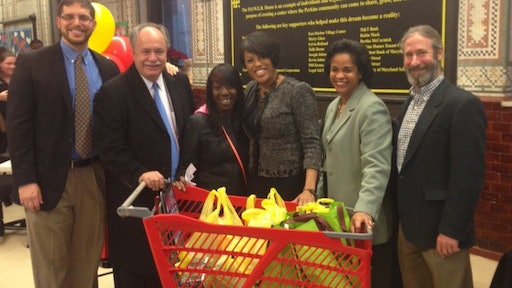 Baltimore's Virtual Supermarket program will be offered at Perkins Homes and Wayland Village Senior Apartments, under an expansion announced by Mayor Stephanie Rawlings-Blake is expected to announce Tuesday, The Baltimore Sun reported.

The city's program, which is the first of its kind in the nation, allows shoppers to order their groceries online and receive free deliveries at community sites in Baltimore's food deserts. The program is designed to expand the availability of healthy food in the city's low-income neighborhoods that don't have any large grocery stores nearby.

"This expansion is about making life better for too many Baltimore city families who lack easy access to groceries, more than 30,000 of which are our children," Rawlings-Blake said in a statement. "That is absolutely unacceptable to me.

"In partnership with our community and business partners, we are taking action to help residents in some of our most challenged neighborhoods access healthy foods to feed their families."

The expanded effort is offered in partnership with Klein's Family Markets and ShopRite of Howard Park.

Editor’s Insight: Food retailers are participating in community food access initiatives such as this one in Baltimore to address a national problem: poor access to food in low income communities. Through these programs, trained volunteers deliver food to pickup sites. For participating retailers, these programs are a way to reach consumers who lack access to food and to be involved in the community.

As part of the First Lady Michelle Obama’s “Let’s Move” initiative to combat childhood obesity, the Departments of Treasury, Health and Human Services and Agriculture have worked to expand the availability of nutritious food through the establishment of healthy food retail outlets, including developing and equipping grocery stores, small retailers, corner stores and farmers markets to help revitalize neighborhoods that currently lack these options.

The federal government also partnered with the Wallace Center at Winrock International to establish the National Food Hub Collaboration in 2010. There is now a national database of food hubs accessible on the USDA website.

By offering a combination of production, aggregation, distribution, and marketing services, food hubs make it possible for producers to gain entry into new and additional markets that would be difficult or impossible to access on their own. 12-17-14 By Elliot Maras