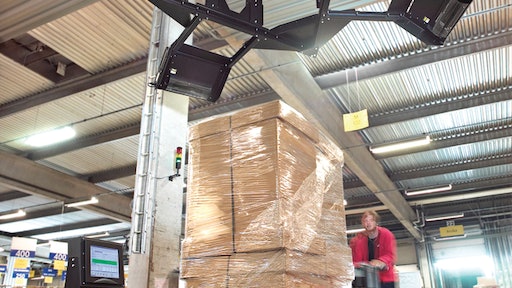 With the use of the latest cubing and weighing systems in the warehouse, food and beverage companies can help improve their carbon footprint while remaining frugal. Understanding cubing and weighing technologies—what they can and cannot do—keeps companies well-informed as to how the systems can enhance efficiencies.

Latest trends
Although the cubing and weighing sector has been making incremental improvements to its systems over the years, one of the more important developments has been the utilization of on-demand boxes.

“There are companies out there that cut and build and make a box specific to the order,” says Randy Neilson, director of sales and marketing at Quantronix, a Farmington, UT company known for its CubiScan products.

Another recent trend in the cubing and weighing sector is a change in the arrangement of SKU pallets. “The industry has trended from single SKU pallets, to layered (or rainbow) pallets to fully mixed SKU pallets,” says Stephen Hoffman, technology specialist at Dematic. Assembling fully mixed SKU pallets creates a more aisle-friendly pallet for specific customers. Mixed pallets can quickly and efficiently replenish the shelves, which help increase customer satisfaction.

These fully mixed SKU pallets also save a company money by decreasing the transportation costs. According to Hoffman, with a combination of both pallet software and dimensioning systems, this “can result in more dense mixed case pallets that may even be stable enough to allow for double stacking in a delivery vehicle.”

“Up until now there really hasn’t been a small static cubing and weighing system that has been capable of measuring larger case sizes as well as measuring the odd shapes and small components at high accuracies and high resolution,” says Neilson.

Along with the dimensioning system being extremely swift, it can measure and weigh irregular items up to 5/100 of an inch and 5/1000 of a pound. [Note: a YouTube video, which can be seen here: http://tinyurl.com/CubiScan, depicts how the CubiScan 125 works with boxed items and irregular-shaped items].

The CSN840 also includes a traffic light to inform the operator the current status of the system: A green light lets the operator know the system is ready to measure; the yellow light means the system is currently measuring a pallet and the red light symbolizes that an error has occurred with the system.

“With [Mettler Toledo’s] system, pallets are delivered to the scale by fork vehicle,” says Dematic’s Hoffman. “The operator scans the pallet barcode and the scale captured weight and cube captured by the overhead dimensioner are married together.” [Note: an in-depth video of the CSN840 can be seen in action here: http://tinyurl.com/CSN840Pallet].

A significant advantage of this dimensioning system is the addition of a digital camera, which captures high-resolution photos of the pallets. “This is good for quality, damages, and any disputes that may arise,” says Jerry Stoll, marketing manager of Mettler Toledo.

Alongside with knowing the most accurate dimensional weight, using the proper box for your cargo is also essential in order to avoid having too much void space.

“It can get very expensive shipping too much void space in a box,” says Quantronix’s Neilson. “If you’re picking a better size carton for your order then typically you’re going to have less filler material in the cartons.”

By selecting the best size box for the cargo, a company can save money by using less filler materials and by also using less corrugate. This not only saves companies money, but it also has a positive impact on the environment.

“Food suppliers can save up to 30 percent in raw material costs, avoid petroleum-based fillers altogether, limit the quantity of damaged items, and reduce their packaging’s overall environmental impact on the planet,” says Packsize’s Kiessner.

Trends on the horizon
Currently, cubing and weighing systems are considered to be pricey pieces of machinery, since they’re specialized equipment designed for specific applications. However, that may change in the future.

“As dimensioning becomes a bit more mainstream, I would look to see maybe the cost of this equipment to begin to come down a little bit,” concludes Neilson.

Sizing Up The Right Box
Operating an efficient company while simultaneously maintaining an environmentally sound footprint can be a challenge for some companies, but utilizing on-demand packaging systems, such as Packsize’s On-Demand Packaging, can help support a company’s sustainability efforts while remaining cost effective.

Following are five reasons why companies are choosing Packsize, according to industry expert and company CEO, Hanko Kiessner:

1 – Helps a company prevent waste. “Food suppliers can save up to 30 percent in raw material costs,” says Kiessner, “avoid petroleum-based fillers altogether, limit the quantity of damaged items, and reduce their packaging’s overall environmental impact on the planet.”

2 – It can reduce transportation costs. Packsize On-Demand Packaging can reduce “the number of trucks and planes needed for shipping by as much as 30 to 40 percent,” says Kiessner.

3 – Positive impact on the environment. Using an on-demand appliance, according to Packsize, has prevented “32 million kilograms of CO2 from being released into the atmosphere.”

4 – Saves money. When utilizing on-demand packaging, it can save a company up to 20 percent by reducing corrugated costs. In addition, using filler material in boxes can be reduced or eliminated completely.