IARC classified processed meat as "carcinogenic to humans" on its group one list along with tobacco and asbestos, for which there is "sufficient evidence" of cancer links. 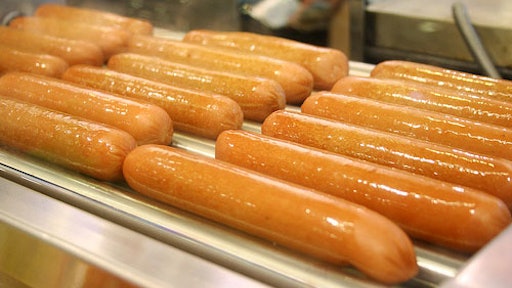 World Health Organization (WHO) experts said eating processed meats like hot dogs, sausages and bacon can cause colorectal cancer in humans, and red meat is also a likely cause of the disease, reported Reuters.

The review by WHO's International Agency for Research on Cancer (IARC), released on Monday, said additionally that there was some link between the consumption of red meat and pancreatic cancer and prostate cancer.

IARC classified processed meat as "carcinogenic to humans" on its group one list along with tobacco and asbestos, for which there is "sufficient evidence" of cancer links.

Each 50-gram (1.8-ounce) portion of processed meat eaten daily increases the risk of colorectal cancer by 18 percent, the agency estimated.

A 50-gram portion would be the equivalent of eating one hot dog or two slices of bacon. Americans eat about 21.7 grams of processed pork per day, according to a 2011 National Health and Nutrition Examination Survey.

Red meat was classified as probably carcinogenic in IARC's group 2A list, joining glyphosate, the active ingredient in many weedkillers.

The IARC examined some 800 studies during a meeting of 22 health experts earlier this month.

"For an individual, the risk of developing colorectal (bowel) cancer because of their consumption of processed meat remains small, but this risk increases with the amount of meat consumed," Dr. Kurt Straif of the IARC said in a statement.