The government of Bahrain has reclaimed the necessary land for construction of the new plant, which will have a total capacity of nearly 90,000 tons per year with a plot size of more than 250,000 square meters (2.7 million square feet). 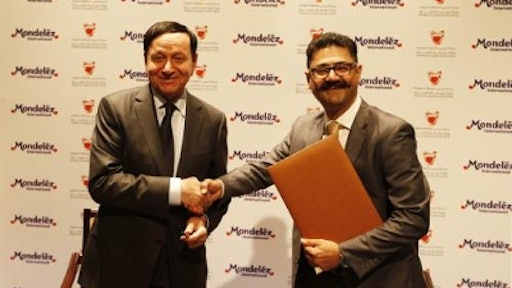 Mondelez International laid the cornerstone for construction of its new $90 million biscuit plant in Bahrain as the world's leading maker of chocolate, biscuits, gum and candy seeks to tap rising demand in the Middle East and Africa for beloved company brands such as Oreo, Ritz and TUC biscuits.

The company announced the project in October 2014. Full commercial production is scheduled to start early next year.

"Demand for our biscuits in the Middle East and Africa has been growing at double-digit rates and investing in a state-of-the-art facility in Bahrain will enable us to capitalize on this," said Daniel Myers, Mondelez International executive vice president, integrated supply chain.  "This new investment is part of our journey to reinvent our supply chain around the world to meet growth demands, while also reducing costs and improving productivity."

Mondelez International's supply-chain reinvention plan is expected to deliver $3 billion in gross productivity savings, $1.5 billion in net savings and $1 billion in incremental cash during 2014 to 2016. These savings will be a primary driver of significant improvements in the company's base operating-income margin in the near term.

Myers spoke at a cornerstone ceremony for the plant in Bahrain recently under the patronage of Bahrain's minister of industry and commerce, His Excellency Zayed R. Alzayani. Also attending were other Bahrain ministers, the president of Bahrain customs, Sheikh Mohamed Al Khalifa, and the ambassador of the U.S. to Bahrain, William Roebuck.

"Having confirmed the project in October 2014, we are very pleased to see Mondelez International moving ahead quickly with construction of this multi-million-dollar facility that will make such a valuable contribution to the economy and people of Bahrain," His Alzayani told the select gathering. "We look forward to the completion of construction and full commercial operations early next year."

The government of Bahrain has reclaimed the necessary land for construction of the new plant, which will have a total capacity of nearly 90,000 tons per year. The plot size of more than 250,000 square meters (2.7 million square feet) is the equivalent of 30 soccer pitches.

In the initial 2- to 3-year phase, the plant will operate four biscuit-manufacturing lines producing – in addition to Oreo, Ritz and belVita – Prince and TUC biscuits, as well Barni cakes. Like other state-of-the-art Mondelez International plants, the facility is expandable and will help bring to life our global strategy of protecting the well-being of our planet through the design and operation of growth facilities that minimize our environmental footprint.

The new Bahrain plant will create as many as 300 direct jobs by the end of the initial phase and, through a multiplier effect, help sustain over 1,000 more in the local economy. Aimed at meeting demand in the Middle East and Africa for next 20 years, the facility has the potential to generate several hundred more direct jobs and sustain thousands of indirect jobs depending on future investment-decisions.

This is Mondelez International's second major investment in Bahrain. The company has already invested more than $75 million in developing a Kraft Cheese and Tang powdered-beverage plant in Bahrain which has been operational since 2008. With a production capacity of 110,000 tons per year, the existing facility employs more than 240 people and has injected over $250 million in the local economy since construction through wages, and purchase of goods and services.