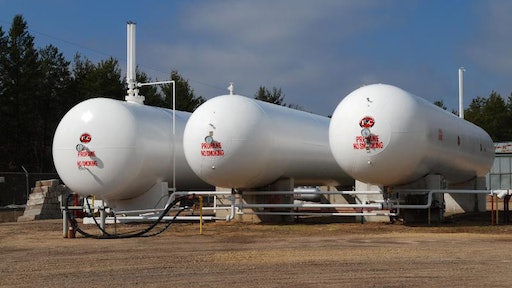 "This agreement is part of an estimated $24 million investment previously announced by CHS to expand propane service in the region affected by the Cochin reversal project," said Drew Combs, CHS vice president of propane. "These investments will also help position our customers for future growth."

"Given the severe winter that we experienced, this new CHS propane terminal is a great and welcomed addition to Wisconsin's propane infrastructure," said Wisconsin Governor Scott Walker. "We appreciate CHS making such a significant investment in Wisconsin as it will better help us ensure the health and safety of Wisconsinites and our neighbors in Minnesota and Iowa."

Served by the CN railroad, the new terminal is expected to be completed by fall of 2014. It will have 360,000 gallons of storage tanks with the ability to offload six railcars every 4.5 hours and two truck loading bays capable of loading six trucks per hour. To view an animated video showing the planned propane site, go to Hixton propane terminal.

"With the reversal of the Cochin pipeline, our propane supply will be compromised. We are excited to work with CHS on this venture to ensure a steady propane supply for our customers," said Jeff Polivka, general manager and CEO, Federation Cooperative. "Sometimes being in the right place at the right time adds member value, and that is certainly the case with this opportunity."

CHS will access and distribute propane through the new terminal to serve existing and new customers in Wisconsin, Minnesota and Iowa.

Through digitization of hourly, daily, weekly, monthly and quarterly routines, a brand creates a culture of food safety and a mindset for continuous improvement and optimization — from entry-level employees to senior management.
ComplianceMetrix, LLC (CMX)
March 17, 2021

By incorporating a real-time, material-centric view, companies can collect, model, create and deliver from farm to fork to eliminate recalls, maximize throughput and enhance sustainability.
ThinkIQ
March 12, 2021
Follow Us