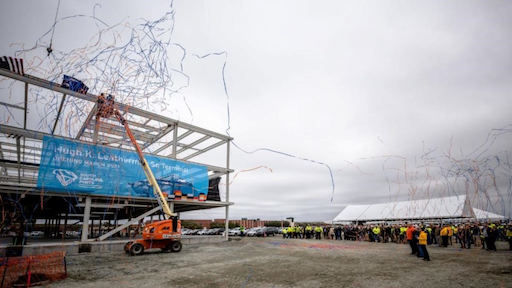 S.C. Ports celebrated today the structural completion of the terminal’s new operations building. More than 300 people — contractors, port employees, elected leaders and community members — cheered as a steel beam and tree were placed atop the steel structure as part of a traditional “topping out” ceremony.

The 34,853-square-foot building, built by Samet Corp., will have offices, meeting spaces, crane operator rest and training areas, and a full-service kitchen, as well as the backup power required to maintain critical infrastructure in the event of a power outage.

“S.C. Ports has seen tremendous growth over the past decade as bigger cargo ships continually call on the Port of Charleston. The Port has long been the economic engine of South Carolina, and with the new terminal, this will only increase,” Leatherman said. “The container terminal will expand operations and support high-paying jobs for our citizens. It gives me great pride to see the construction progress, and I look forward to the positive impact its completion will have on our state for generations to come.”

The Leatherman Terminal sits on the former Navy Base in North Charleston. The 134-acre Phase One will have a 1,400-foot wharf that can accommodate up to 19,000-TEU vessels.

The $1 billion investment comes at a time when S.C. Ports needs additional capacity to handle the larger ships calling on the Port of Charleston. The Port has doubled container volumes over the past decade and records significant cargo growth year-over-year.

“In a little more than a year, ships will call on the country’s newest container terminal,” S.C. Ports Authority president and CEO Jim Newsome said. “The opening of the Hugh K. Leatherman Sr. Terminal in March 2021 will greatly enhance our cargo capacity and big-ship capability. Our strategic investments and years of hard work are coming to fruition at just the right time as more ships call on the East Coast. This new terminal propels S.C. Ports into the future.”

The state-of-the-art facility will boast both electric and hybrid equipment that will ensure efficient operations while reducing emissions. Phase One will house the tallest ship-to-shore (STS) cranes at the Port of Charleston with five cranes with 169-foot lift height, as well as 25 new hybrid rubber-tired gantry (RTG) cranes, all set to arrive this year.

The Leatherman Terminal will be built in phases over the next decade, based on market demand. At full build-out, the 286-acre terminal will have three berths capable of handling 2.4 million TEUs of cargo, doubling the port’s existing throughput capacity.

“Our engineering team and contracting partners have been working diligently to complete the construction of Phase One of the Hugh K. Leatherman Sr. Terminal,” said Walter Lagarenne, S.C. Ports’ Director of Engineering and Permitting. “Phase One work is progressing well, and the terminal is on track to welcome container ships, including ultra-large container ship class vessels, to the new 1,400-foot wharf in March 2021.”