West Coast Port Slowdown Gives Glimpse Into Future Shipping Rates; What To Do About It

Lessons from the West Coast port slowdown caused by a labor dispute. 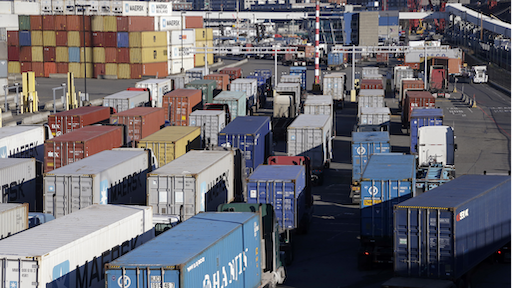 Loaded container trucks line-up at a gate at the Port of Seattle, Tuesday, Feb. 17, 2015, in Seattle.

(Editor’s Note: As West Coast workers return to loading and unloading cargo, shippers are finally breathing a sigh of relief. But they aren’t in the clear just yet and can expect to feel the lasting impact of the port shutdowns for several months. John Westwood, senior manager for transportation at Chainalytics, a global supply chain consultancy, offers some lessons for shippers when encountering future port slowdowns. Westwood specializes in strategic sourcing and running large scale procurement events for Fortune 500 companies across all major transportation modes.)

This situation should serve as a wake-up call to the reality of ocean transport, which can be wrought with uncertainties like labor disputes, natural disasters, and other factors that cause rate fluctuations. Rates and capacity typically have seasonal patterns to them, but when they do change unexpectedly or dramatically, shippers are forced to alter their strategic courses to avoid rate premiums. Newly motivated shippers should take time now to reevaluate their supply chains to mitigate future risks.

Ocean shippers have long enjoyed the benefits of excess capacity in ocean transport. This can be traced back to the economic boom of the late 1990s, when ocean carriers bolstered capacity with the construction of megaships capable of efficiently moving unprecedented quantities of cargo. However, the long lead time on shipbuilding caused many of these vessels to come online after the recession of the late 2000s, leaving behind a striking imbalance between vastly improved capacity and dwindling demand in light of the economic downturn.

This disparity put pressure on ocean carriers, and their struggle to fill ships to meet newly expanded capacity drove shipping rates down. As a result, shippers sought to take advantage of a continually contracting rate schedule by purchasing spot capacity through non-vessel operating common carriers (NVOCCs), which are positioned to leverage falling rates through short-term capacity buying.

The largest ocean carriers (by volume and revenue) are now responding by forming new alliances and sharing resources, tightening capacity and putting upward pressure on rates. Once supply and demand are realigned, rates will rise and the NVOCCs will not be able to secure rates that are lower than shippers could lock in through long-term direct contracts with ocean carriers on their own. Disruptions like the West Coast port shutdown offer glimpses into the future of shipping rates.

Even with ports back in full operation, the spot market is no longer a safe haven for shippers hoping to capitalize on capacity abundance.

Shippers looking for quick fixes to recover from the logjam caused by the West Coast port shutdowns will be disappointed to learn that there this is no magic bullet. For example, think about that parent who waited until the last minute to buy the season’s hot holiday gift. The product may still be available, but procuring it during its peak demand requires waiting in long lines or paying a hefty premium online.

Depending on a shipper’s individual requirements, one or more of these three alternatives could provide some relief:

1. Alternative ports – Getting in and out of West Coast ports is likely to remain problematic and expensive for many months. Shippers dealing in perishable or refrigerated goods can look to alternative ocean ports in Canada and Mexico – and even inland ports, to some degree – to move cargo with relatively small hits to transit times and budgets. Mexico, in particular, has made strides in recent years with its intermodal infrastructure and can provide more relief than many shippers realize. When transit times are not as imperative, Gulf Coast and East Coast ports are viable alternatives.

2. Turn to the spot market – Rate premiums in the spot market for West Coast shipping are high, but quality NVOCCs are able to secure capacity for shippers with whom they have good relationships. Established NVOCCs can advise on what rates are afforded to keep a shipper’s cargo onboard as the ocean carriers become more selective with the cargo they set sail with, prioritizing the most profitable container loads. As ocean carriers begin to refuse contract rates that are no longer attractive, more shippers who can’t leverage massive shipment volumes will be forced to consider spot market premiums to move their cargo. Shippers already paying these premiums can negotiate “last on, first off” priority loading and unloading in their contracts to minimize idle time. While actual transit times on ocean vessels cannot be influenced, the time cargo spends aboard a ship while it is docked can. Minimizing the amount of time perishable goods are in transit is always key to avoiding unnecessary spoilage and retaining maximum profitability for shippers.

3. Air freight – The most expensive transportation mode, air freight is rightfully seen as the option of last resort by most shippers. When faced with supply that simply cannot wait any longer to make it to its destination, a plane ride may be the only option left. Shippers not accustomed to even considering air freight should perform a cost-benefit analysis to determine if it is a viable option for salvaging the ordered cargo over losing the sale completely.

Labor disputes, tightening capacity, piracy, natural disasters – nobody knows the next major event to impact ocean rates, but a gamble on long-term stability has poor odds. This uncertainty should give supply chain managers a shot in the arm to start planning ahead now for the disruptions that loom on the horizon to avoid paying a premium the next time around.

By exploring their options – and modeling both predictable and unpredictable supply chain and freight management scenarios--they can get much better senses of the best strategies and tactics to consider. The following actions can help mitigate future exposure to unforeseen rate spikes and capacity crunches.

● Nearshoring capabilities – The rising cost of labor and energy in Asia has made nearshoring an increasingly viable option for many North American supply chains. Infrastructure improvements in Latin America have increased opportunities to use trucktruckload or rail modes to shorten distances, sometimes reducing all-in transportation costs by up to 50 percent. Common time zones, reduced language barriers and similar cultural alliances also increase ease of conducting business with suppliers. It’s definitely worth exploring in the face of the aggregate trend of rising transportation rates.

● Cross-docking – Modern distribution centers can be designed with an eye for cross-docking, or moving inventory in and out without ever placing cargo in storage. Minimizing the amount of time perishable goods are held in warehouses increases the likelihood that they will be sold before expiration. The efficiencies gained at this level of distribution allow more network agility for transit times that are outside the locus of shipper control.
The biggest lesson to glean from the West Coast labor dispute is that supply chain disruptions are unlikely to ever become completely avoidable, and their unpredictable nature makes them very difficult to respond to at the last minute. The best course of action is to build flexibility and contingency plans into supply chains, creating alternative paths for goods to flow through before primary lanes become stymied. Each shipper must carefully weigh the costs associated with these alternative courses alongside their benefits to help determine the next best course of action.

Jason Palmer, president of SmartDrive, discusses how video recording systems are helping take fleet safety to the next level.
May 18, 2017