Upgrading to an automatic stretch wrapper will provide safer and more secure loads, reduce potential injuries and give a quality return on investment. 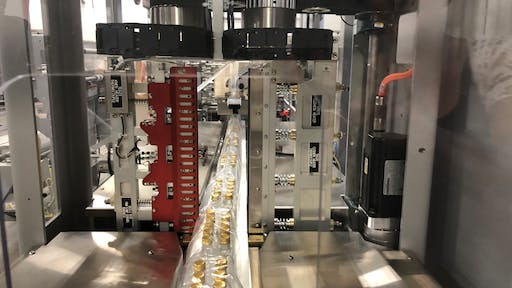 Stretch wrapping is an area of the packaging process that tends to get overlooked at times, and it’s easy to see why.

Applying stretch wrap is literally the last step before pallets are loaded onto tractor-trailers for delivery. For some, just getting stretch wrap around the product a few times is good enough. But, is it?

When it comes to stretch wrapping, there is a much better method. Automating your stretch wrapping processes will not only save you money in the long run, but will also help get your loads from Point A to Point B safely and securely. There’s no reason to settle for good enough when better, more cost-effective options are available.

The downside of hand wrapping

For most manufacturers, packagers and distributors, keeping costs down is a major concern, and one of the more significant unplanned costs is returned products. Unfortunately, their stretch wrapping can be contributing to that problem.

For example, you’ve just loaded several poorly wrapped pallets onto a tractor-trailer for delivery. Miles down the road that semi swerves on the interstate to avoid an accident and dumps the entire load inside the truck. The driver doesn’t realize the damage until he/she raises the cargo door; that load cannot be delivered and now needs to head back to the facility. Your customer isn’t going to pay for that – you are.

Another way poor stretch wrapping practices could be costing money is through injuries. Many companies still hand wrap pallets, but this is a very inefficient method of wrapping. Repeatedly bending over or twisting to hand wrap pallets can lead to painful back strain injuries; that employee is now off the job and costing you money in lost production, medical bills and workers compensation claims. For employees hand wrapping, it’s not a question of if they’re going to get injured, it’s when.

In addition to injuries, hand wrapping pallets leads to inconsistent wraps due to individual strength or fatigue. An employee at the start of their shift will likely wrap a pallet a bit tighter than at the end of their shift, especially if they’ve been doing it all day. That person has been bending over all day, going around pallets and getting dizzy – it stands to reason that their wraps simply won’t be as safe and secure as they need to be.

Upgrading stretch wrapping capabilities through automation gives you safer and more secure loads, while also reducing the risk of injuries. These two factors alone will save you money in the long run. But, so will film reduction, which is another benefit of automatic stretch wrapping equipment.

Film is designed to be stretched when wrapped around a load. By stretching the film and applying it to the load, it acts as a rubber band keeping the product tight and secure. When film is applied by hand, a person at the beginning of their shift may be applying 100% stretch to the film (that percentage drops as fatigue sets in). While that percentage may seem impressive, it doesn’t compare well to automatic units that typically wrap with pre-stretching film at 250%. A pallet that’s wrapped with film pre-stretched to 250% uses less film than a pallet hand-wrapped at 100%; the film savings is even greater as that pre-stretched percentage is even lower. Being able to achieve a consistent 250% pre-stretch film on each and every load, month after month, uses less film, saving more money in the long run.

Further demonstrating film savings is seen through reducing what’s called the neck down effect. As film is stretched, it tends to narrow; this action is called neck down. For instance, when automatically applying a 20-inch-wide film, by the time the film comes in contact with product on the pallet, it’s been narrowed on average to about 16.5 inches. You’ve paid for 20 inches, but you’ve lost 3.5 inches. This is now going to take extra film to properly wrap the pallet.

However, the design of some automatic stretch wrapper machines works to reduce the amount of neck down to about 18.5 inches on a 20-inch-wide roll of film. The benefit here is that it gives you more coverage and contact with the pallet, reducing the amount of film needed to wrap it.

Deciding to automate your stretch wrapping capabilities is a great way to begin saving money. However, this is just one specific area. There may be more opportunities to upgrade other sections of end-of-line packaging as well. A reputable OEM supplier can perform an audit of your entire packaging line. An audit not only analyzes current stretch wrapping processes, but also examines how product arrives to and travels through your end-of-line system.

A key component of a packaging line audit is asking why. Being able to uncover reasons why something is done the way it is can be very telling in learning not only about their packaging line and the rationale of how things accomplished, but also a company’s culture. Sometimes an audit can uncover an area of inefficiency upstream that’s affecting productivity at the stretch wrapping cell. The goal is to review the entire end-of-line system, and based on a company’s sales and production goals, recommend the best course of action to meet those benchmarks.

Automation is lending a helping hand to many areas of packaging, and stretch wrapping is certainly one of them. The decision to upgrade to an automatic stretch wrapper will provide safer and more secure loads, reduce potential injuries and give a quality return on investment that’s noticeable to the bottom line – three factors that are hard to overlook.

The U.S. packaging industry is directly responsible for 489,440 jobs.
AMERIPEN – the American Institute for Packaging and the Environment
June 23, 2021

Case packing in the cold chain is dominated by automation and sanitation, like so much of the supply chain today.
Brielle Jaekel
May 31, 2021
Follow Us