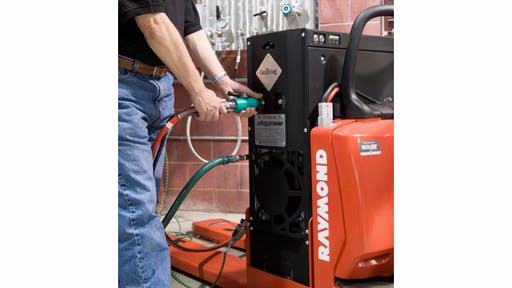 Plug Power Inc. has helped ARYZTA streamline its logistics with hydrogen fuel cells since 2016. The implementation of fuel cell technology has driven a tremendous increase in fleet productivity for the leader in the frozen B2B bakery industry.

Plug Power’s fuel cells increased ARYZTA’s average picks-per-hour by 100% in 2018, trending to a 133% increase in 2020. With this in mind, the company has set ambitious goals for future productivity projections to reach a 188% increase in picks-per-hour over the 2016 baseline. ARYZTA presents the ideal use-case for capitalizing on productivity improvements as a result of Plug Power’s innovative GenDrive hydrogen fuel cell technology.

“Our robust freezer application was draining our batteries and impacting our productivity,” says Joseph Holy, director, logistics at ARYZTA. “The use of the fuel cells in our Romeoville, Ill., distribution center has been transformative, and has made the site an example for others.”

Battery-powered lift trucks lose approximately 14% of their speed over the last half of the battery charge, and this only becomes exaggerated in freezer applications like those operated by ARYZTA. GenDrive fuel cells maintain constant power at all times, keeping the vehicle running at full speed throughout the entire shift.

Fueling a GenDrive fuel cell only takes minutes at dedicated, conveniently located fueling stations at the customer facility. Battery changing requires 15 minutes per shift compared to two minutes for hydrogen refueling. Over a year, that 13 minutes per shift saved represents over 234 hours of lost productivity per forklift truck in a three-shift operation.

“Plug Power’s fuel cell technology has been proven by the 30,000 units deployed today,” says Andy Marsh, chief executive officer for Plug Power. “But, the productivity shown by ARYZTA is an impressive case study for the zero-emission solution. These productivity improvements equate to improvements to the bottom line - something that is important to each and every customer.”

With over 300 million hours of runtime in the field, greater than 32,000 units deployed and more than 20 years of innovation, Plug Power is the largest buyer of liquid hydrogen and has built more hydrogen refueling stations than anyone else in the world, representing an unparalleled breadth of knowledge and industry know-how. The experience, manufacturing and supply chain capabilities, and insights provided to long standing blue chip clientele speak to Plug Power’s reliable integrity and ability to ideate and innovate their offerings faster than competitors, while remaining future-proof in the face of an ever-evolving electrified world.