Spot the warning signs and take action to address these dangerous conditions. 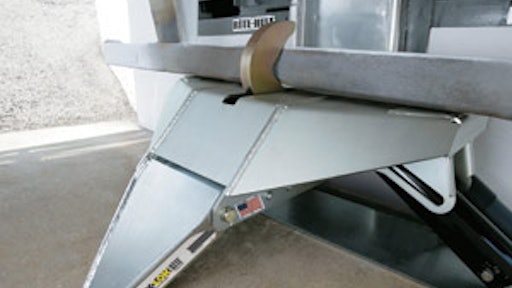 Safety managers have made significant strides in their efforts to improve loading dock safety for semi-trailer truck drivers, forklift operators and anyone who comes into contact with an organization’s shipping and/or receiving areas. Yet despite the progress, two safety issues—known as dock shock and trailer drop—pose serious health and safety risks. The issues also adversely affect the profitability of virtually every facility with a loading dock.

Dock shock and trailer drop are associated with chronic safety issues involving spinal injuries, which are to be avoided whenever and wherever possible. A first-time back injury alone can cost as much as $10,000 when drugs, doctor’s visits and physical therapy are factored into the ailment. One recent study published by Ohio State University reports that severe back injuries that occur when a person is hurt over and over again can cost as much as $300,000.

The key to addressing dock shock and trailer drop is to understand how and why these issues happen. Equally important is the ability to spot signs that the problems exist within a facility, and if so, taking action to address them.

Dock shock and trailer drop are terms assigned to unsafe situations that occur during the process of unloading and loading semi-trailer trucks.

Dock shock describes jarring that occurs when a lift truck (stand-up walkie or forklift) crosses between the warehouse floor and the trailer bed due to the bumps and gaps that exist on traditional dock levelers.

Trailer drop describes vertical trailer bed movement or “drop” that occurs with the weight of lift trucks traveling in and out of unstable trailers. The situation is compounded when trailers with air-ride suspension systems are involved as they tend to create increased vertical movement and move away from the loading dock during loading/unloading. Trailer drop causes lift truck operators to experience significant jolts, which can lead to chronic back and neck injuries.

The issues of dock shock and trailer drop came to light when companies expressed concerns about product damage and damage to dock equipment. Also of major concern were the adverse effects that jarring and jolting have on the health of forklift drivers.

At virtually any traditional loading dock configuration, lift truck operators encounter significant jarring and jolting as they transfer materials within a facility’s shipping/receiving/staging area and move in and out of trailers.

It soon became clear that no single culprit is responsible for jarring and jolting, which is one of the primary reasons why the problem had often gone unchecked. Instead, the dynamics of lift trucks (both forklifts and stand-up walkies) and their interaction with semi-trailer trucks are a key factor.

This realization dictated the need to further analyze how dock levelers and vehicle restraints influence the situation. Dock levelers serve as a bridge between the dock floor and a semi-trailer. Vehicle restraints are devices that latch onto a trailer’s Rear-Impact Guard (RIG) to keep trailers from separating from the dock during loading/unloading. The restraints help to prevent a variety of catastrophic accidents.

Research showed that a lift truck experiences significant jarring as it encounters bumps and gaps found on standard dock levelers during the loading and unloading process. Subsequent analyses showed conclusively that dock shock serves as a significant source of vibration.

Similarly, research demonstrated that trailer beds move vertically, or “drop,” due to the weight of lift trucks traveling in and out of unstable trailers. Trailer drop is often severe when trailers with air-ride suspension systems are involved because the systems float up and down to maintain a consistent trailer height when loaded or unloaded. The situation causes lift truck operators to experience significant jolts.

Jarring and jolting at the dock is an issue closely tied to occupational vibration. There are two types of occupational vibration: segmental, such as hand-arm, and Whole-Body Vibration (WBV), which is transmitted to the entire body through supporting surfaces, such as the legs when standing and the neck, lower back and buttocks when sitting.

WBV exists in many environments. At the loading dock, WBV exposure has often been associated with forklifts. According to documented reports, back disorders are more prevalent and more severe in forklift operators exposed to WBV versus non-exposed operators.

Problems with vibration have not gone unchecked. The International Organization for Standardization (ISO) has issued various guidelines for vibration exposure levels. ISO2631/1, for example, outlines acceptable vibration standards. The European community has also taken notice. In 2002, the European Parliament and the Council of the European Union issued Directive 2002/44/EC to provide minimum health and safety requirements regarding the exposure of workers to the risk arising from vibration.

Lift truck jolting and jarring at the dock have also caught the attention of key industry organizations. The Occupational Health Clinics for Ontario Workers Inc. recommends that employees minimize the undulations of the surface over which lift trucks must travel as a way to reduce the effects of WBV. At the same time, the National Institute of Occupational Safety and Health (NIOSH) reports that shock (jarring and jolting) causes 36 percent of all head, neck, and back injuries associated with mobile equipment operators.

The forklift industry has also worked to address problems associated with WBV. Just some of the forklift innovations designed to minimize vibration include pneumatic tires, contoured and pivoting seats, vibration-dampening engines, anti-vibration seats, and advanced seat-suspension systems and seat cushions. However, many studies indicate that loading dock equipment—not just forklifts—contribute to WBV and chronic injuries at the loading dock. Key factors often cited as being problematic are the warehouse floor surface, as well as undulations and sudden, unexpected movements or loads. Published reports show that the amount of vibration transmitted to lift truck operators is primarily a factor of how smooth the driving surface is.

Leading researchers have also suggested that sudden changes in elevation, such as when entering/exiting a rail car, result in harmful high impact loads. These same reports suggest that special attention be paid to the design of entry points into trailers. Additionally, researchers recommend that bridges (levelers) used to span the space between the dock and the trailer (or a rail car) be designed to minimize any shock, especially if the height of the dock is higher/lower than the floor of the trailer.

With the wide range of factors influencing whether dock shock and trailer drop occur at a particular loading dock, there’s little question as to whether the issue is complicated. Yet it’s relatively easy to identify whether the problems exist. Telltale signs that point to potential problems include:

Forklift operator complaints: The average forklift driver transitions in and out of semi-trailers hundreds of times per shift, which amounts to serious levels of vibration over time. If forklift operators are complaining, take notice.

Forklift driving patterns: Forklift operators often comment that the worst bump experienced is when they transition in and out of trailers. Check whether forklift operators are purposely slowing down as they enter and exit trailers.

Trailer movement: Tests of air-ride suspension systems indicate that the average deflection of trailer bed height from center when a forklift travels in and out of a trailer is six inches. No devices are needed to visually identify up and down movement of this magnitude. If trailer movement exists, trailer drop is likely an issue.

Increased costs: As a lift truck enters a trailer, fragile loads can be damaged, or fall off the pallet if not properly secured. Driving forklifts over steeply inclined levelers and bumpy terrain and into unstabilized trailers also accelerates wear on brakes, tires, transmission, steering axle and other components. If product damage and forklift maintenance costs are inordinately high, consider whether dock shock and trailer drop are factors.

If dock shock and/or trailer drop is suspected, have a trained loading dock equipment representative inspect the dock situation to assess the severity of the problems and the risk involved.

An analysis of loading dock equipment is also in order. A properly chosen system can help prevent dock shock and trailer drop. Some levelers, for example, feature a specially designed rear hinge to create a smooth transition between the warehouse floor and the leveler. These same levelers also use a two-point crown control on the front lip hinge to smooth out the transition from the leveler to the truck bed. The design has also been extended to high-capacity levelers, smoothing out the ride where it’s needed even more—with heavy loads.

Also available are vehicle restraints that are specifically designed to address trailer drop. The restraint supports the rear of the trailer during the loading and unloading process, which minimizes both vertical and horizontal trailer movement.

Given the safety implications associated with dock shock and trailer drop, safety managers and facility decision-makers should be aware of these issues and take appropriate steps to correct them.

A second investment for Red Sun Farms in Ontario is underway with an additional 18 acres of high-tech greenhouse farming, which will drastically expand Red Sun Farms’ overall portfolio and bring the total acreage for this location to 42 acres.
Red Sun Farms
September 14, 2020

How Automation is Revolutionizing Work in the Food Supply Chain

In an age when shifts can and do happen in the blink of an eye, automation offers the chance to revisit how work is done and how to keep workers safe.
Vecna Robotics
September 8, 2020

Here are some of the key “locational drivers” involved in a property’s demand in the marketplace — a unique combination of location, size and in-place infrastructure.
Neil Johnson
September 2, 2020
Follow Us