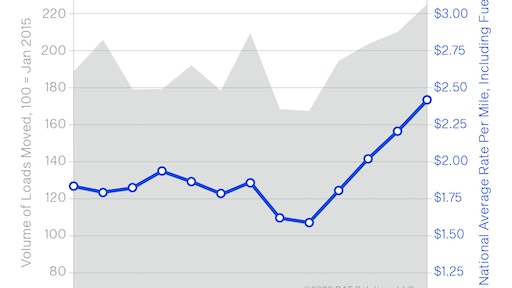 Spot market rates for van and refrigerated (“reefer”) freight soared to all-time highs in September, according to DAT Freight & Analytics, which operates the industry’s largest online marketplace for spot truckload freight. Spot flatbed rates were up from August as well, but were shy of their high-water mark during the middle of 2018.

September spot van, reefer and flatbed volumes were similar to August but load-to-truck ratios increased across all three equipment types as available capacity tightened. The DAT Truckload Volume Index, a measure of dry van, reefer and flatbed loads moved by truckload carriers, rose 6.1 percent from last month and was 13 percent higher than September 2019.

“We’re seeing strong volumes across equipment types as the economy continues to recover, particularly in areas related to consumer spending. It’s good news for retail, but the industrial and energy sectors are still seeing a dip in volumes,” said Ken Adamo, Chief of Analytics at DAT. “Spot market rates just keep climbing as companies turn to the spot market to help them manage imbalances in their supply chains.”

The spot van rate averaged $2.37 per mile nationally in September, up 15 cents compared to August, and 53 cents higher compared to September 2019. At $2.18 per mile, the average spot line-haul rate for vans (the total rate minus fuel surcharges) set a new record in back-to-back months as the highest monthly national average ever and exceeded the national monthly average contract rate in consecutive months, which was also a first.

Spot reefer volumes fell for the third month in a row, down 1.3 percent month over month. The national average reefer load-to-truck ratio was 9.7 in September, more than five times higher than April’s record low of 1.7 loads per truck. The national average spot reefer rate was $2.57 per mile, up 13 cents compared to August, and 41 cents higher year-over-year.