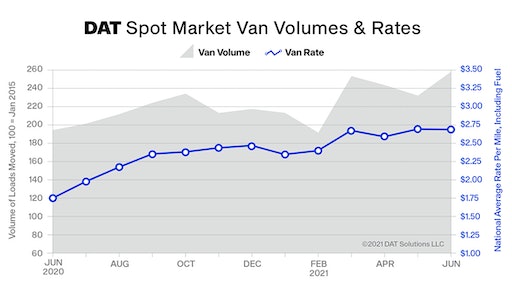 According to DAT Freight & Analytics, the DAT Truckload Volume Index was 237 in June – an 11% increase compared to May, making it a record high.

Meanwhile, rates remain near all-tigh highs. The national average rate for van loads was $2.68 per mile in June, down just one cent from May. In addition, the national average spot rate for refrigerated freight fell one cent to $3.10 per mile month-over-month while the flatbed rate increased three cents to $3.15.

“While the number of trucks posted to the DAT load board network increased significantly in June, overall demand accelerated at a faster pace. The typical seasonal decline in contract and spot rates from now to Thanksgiving looks less likely in 2021,” says Ken Adamo, Chief of Analytics at DAT.