Truckload freight activity dropped in April, though the month was still the second busiest month on record for shippers, freight brokers and motor carriers. 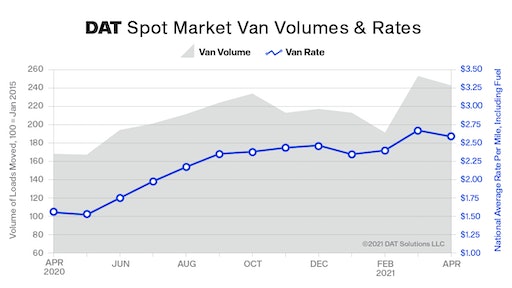 Truckload freight activity dropped in April, though the month was still the second busiest month on record for shippers, freight brokers and motor carriers, according to DAT Freight & Analytics.

In April, the company registered 225 an aggregated measure of dry van, refrigerated (“reefer”) and flatbed loads moved by truckload carriers, down 5% from the high set in March this year.

“It’s not unusual to see a decline from March to April, but truckload freight activity remained at historic levels compared to previous years,” said Ken Adamo, Chief of Analytics at DAT. “The April TVI was 39% higher than it was in April 2020 and April 2018, and 26% higher than in April 2019, indicating unusually strong demand for truckload capacity last month. Trucking companies are in the driver’s seat with respect to pricing power.”