Spot market rates and volumes increased across all equipment types as economic demand returns to seasonal trends, according to DAT Freight & Analytics, which operates the industry’s largest online marketplace for spot truckload freight. 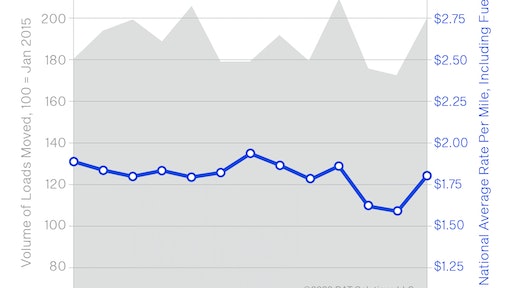 Spot van rates averaged $1.80 per mile nationally in June, up 21 cents compared to May. The rate increase is indicative of a seasonal surge in freight posted on the DAT One load board network.

Spot market rates and volumes increased across all equipment types as economic demand returns to seasonal trends, according to DAT Freight & Analytics, which operates the industry’s largest online marketplace for spot truckload freight.

Van, reefer and flatbed numbers all ended up positive month over month, with rates and volumes trending higher.

“The surge we’re seeing in spot truckload rates and volumes is consistent with summer trends, but consumer habits continue to be impacted by COVID-19,” said Ken Adamo, Chief of Analytics at DAT. “For instance, there’s been an early increase in demand for pressure-treated lumber as people tackle home improvement projects. But produce growers and distributors are contending with soft restaurant demand as states reopen at different speeds with different rules.”

Nationally, the June load-to-truck ratio for vans nearly doubled for the second month in a row to 3.5, up from April lows of 1.0. It was up 12.9 percent from this time last year as well, indicative of a market with more freight than trucks posted on the DAT One load board network.

Spot reefer volumes were up 4.5 percent month-over-month due to seasonal produce freight from the Southeast, West Coast and Pacific Northwest. The reefer load-to-truck ratio was 5.5, more than triple April’s all-time low of 1.7 loads per truck.

The national average reefer spot rate was $2.15 per mile, up 13 cents compared to May but 9 cents lower year over year.

A surge in construction activity continued last month’s sharp increase in the national flatbed load-to-truck ratio, 24.8 in June, the highest number since July 2018. June flatbed volume was up 15.9 percent from May and almost even with 2019 numbers. The national average flatbed spot rate was $2.07 per mile, 17 cents more than May but 10 percent lower than June 2019.

Importers will be busy staging retail freight in warehouse markets to prepare for back-to-school shopping season, which runs from July 4 through the end of August. There are also positive signals for the flatbed market, with a major uptick in suburban single-family home construction, which is considered freight-intensive due to the wide range of materials needed for construction.

“There’s clearly pent-up demand in the economy, but the recent surges in COVID-19 cases remain a complicating variable for consumer behavior this summer,” Adamo said. “Retail and consumer packaged goods volumes are way up, but manufactured goods are way down.”