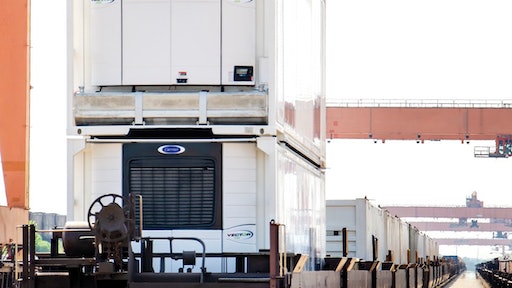 “We believe that the new slim-profile units, which give us extra pallet spaces, combined with the Carrier Transicold refrigeration technology, give us a competitive advantage,” said Jim Richards, president of KLLM.

Unlike domestic intermodal containers that have less interior depth to accommodate traditional refrigeration units that are about 50% deeper, those using the thin-profile Vector 1550 units have the advantage of being able to carry as many pallets as a traditional 53-foot over-the-road trailer – 15 pallet rows vs. 14, or 7% more cargo capacity. As a result, KLLM customers gain the efficiencies of rail transport without compromising the amount of cargo that can be transported.

“The Vector units overcame the capacity obstacle for us, and we’re certainly hoping to convert some of our customers to intermodal transport,” Richards said. “It’s something we are really enthusiastic about. We’re pleased with the performance thus far. The reliability has been very good, and it is a Vector product, so it gives the ability for electrical plug in.”

The Vector 1550 unit is one of the latest versions of the all-electric trailer refrigeration technology invented by Carrier Transicold. It uses Carrier’s innovative E-Drive technology, in which a uniquely all-electric refrigeration system is powered by a high-output generator direct-coupled to a diesel engine. The design eliminates complexity found in traditional transport refrigeration systems, and, using intelligent controls, works more efficiently. As a result, components run fewer hours and last longer than traditional counterparts. When stationary, Vector units can be plugged into an electric power supply, allowing them to operate without the fuel consumption, emissions and noise from running the refrigeration unit engine.

Compared to alternative systems, Vector 1550 units are lighter and more compact, and they operate at high efficiency with lower engine speeds, producing as much as 27% more cooling per hour per RPM than its nearest competitor.

“Although over-the-road trucking continues to be our core business, we do see certain customers moving some volume toward intermodal, and we are positioning ourselves to support them,” Richards said, noting intermodal brings advantages related to cost and quality of service, as well as sustainability and a reduced carbon footprint. “We see this as a futuristic mode that will continue to grow.”

With its expanding intermodal container services and more than 5,600 refrigerated trailers, KLLM and its Frozen Food Express (FFE) business comprise one of the largest dedicated temperature-controlled logistics services in the United States.

KLLM’s Vector 1550 systems were installed by Southern States Utility Trailer through a turn-key program in which teams completed more than 100 installations a month at a Memphis, Tenn., rail yard. Each installation included a 110-gallon fuel tank to support uninterrupted performance on the rail, as well as telematics for remote monitoring of location, temperature, fuel level and door openings.