Spot truckload volumes and rates rose sharply for dry van and refrigerated freight during the first three weeks of March before cresting and spending the final week of the month well below seasonal norms. 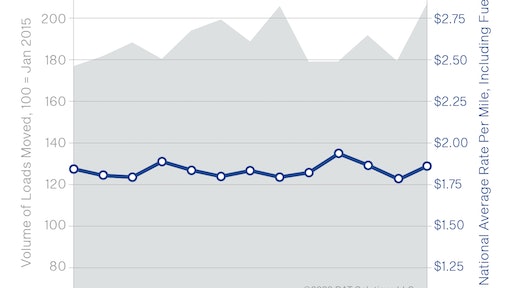 Spot truckload volumes and rates rose sharply for dry van and refrigerated (“reefer”) freight during the first three weeks of March before cresting and spending the final week of the month well below seasonal norms, according to the DAT Truckload Volume Index.

“The increases in March were based on exceptional demand from shippers through March 22, at which point the market turned dramatically,” said Peggy Dorf, Senior Market Analyst at DAT Solutions. “Consumers and supply chains began to adjust to disruptions caused by the COVID-19 pandemic, and the urgency to replenish inventory and secure available capacity on the spot market fell significantly.”

Including fuel surcharges, spot van rates averaged $1.87 per mile nationally in March, up 8 cents from February and 4 cents from March 2019. At $2.19 per mile, the national average reefer rate added 10 cents compared to February and matched the average rate of March 2019.

The national average flatbed rate added 4 cents month over month to $2.19 per mile, a 15-cent decline from March 2019.

Spot truckload volumes rose 16 percent for dry vans and 12 percent for reefers month over month, while flatbed load counts added 9 percent. Compared to March 2019, volumes increased 17 percent for both van and reefer equipment, while flatbed volume edged up only 2 percent.

As averages, these percentages are considerably higher than a typical March but were tamped down by the drop-off in activity late in the month.

“Based on our truckload pricing data and predictive models, we anticipate further downward pressure on dry van rates through the summer unless more certainty returns to the economy,” explained Ken Adamo, Chief of Analytics at DAT.

He added that demand for reefer equipment will improve sooner, as spring produce harvests begin in California and the Southeast U.S. Flatbed freight, which is closely tied to energy markets and construction, remains significantly affected by the downturn in oil prices.