With supply chains strained by the impact of the COVID-19 coronavirus, spot truckload rates were higher for all three equipment types during the week ending March 22 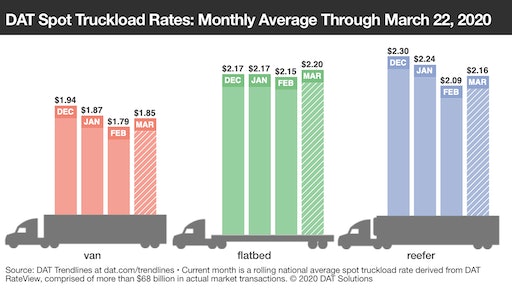 With supply chains strained by the impact of the COVID-19 coronavirus, spot truckload rates were higher for all three equipment types during the week ending March 22, said DAT Solutions, which operates the industry’s largest load board network.

Rates up 12%: The average spot van rate increased on 88 of the 100 highest-volume lanes on DAT load boards compared to the previous week. The line-haul van rate (no fuel surcharge), which entered the month below last year’s average, has increased 12% from $1.51 per mile on March 1 to $1.70 per mile on March 23.

Demand for trucks is rising: The national average van load-to-truck ratio last week was 3.5, up from 3.2 the previous week. That’s the eighth straight week of rising ratios. More dramatically, the average ratio has more than doubled (up 150%) since the same week in 2019.

Mid-range hauls are paying better: Any overnight stay for the driver involves safe parking, decent food, and other roadside necessities that are in short supply right now. Shippers are paying more for van capacity on “tweener” lanes with lengths of haul in the 250- to 600-mile range. Examples:

The average spot rate increased on 66 of the 72 highest-volume reefer lanes DAT tracks.

More pressure coming: In the coming weeks, a new layer of demand will be added to the mix when spring produce harvests begin. Expect reefer rates to remain elevated from now through the end of June.