Port Houston receives nearly $80 million toward its efforts to restore and improve wharf and yard space at its Barbours Cut Container Terminal. 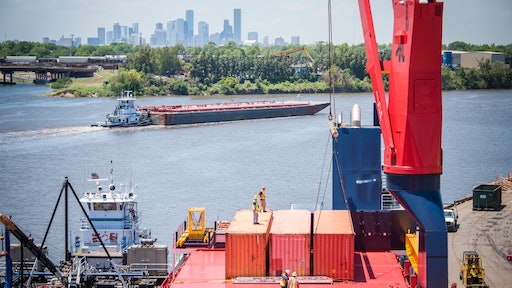 Port Houston receives nearly $80 million toward its efforts to restore and improve wharf and yard space at its Barbours Cut Container Terminal.

The U.S. Department of Transportation (USDOT) awarded $79,472,000 from the Infrastructure for Rebuilding America (INFRA) program to Port Houston, which was the full amount requested for Port Houston’s total $198 million project with a local cost share of 60 percent and the INFRA grant of 40 percent of the future construction costs.

“This funding support will help bring significant economic benefits to the region and nation while maintaining an efficient and safe movement of commerce to the U.S,” says Port Houston executive director Roger Guenther.

The restoration and upgrades are needed to handle the current and future demand of cargo calling at Barbours Cut. The project also provides environmental benefits and emissions reduction.

Barbours Cut Terminal, constructed in 1975, comprises 6,000 linear feet of wharf, and about 390 acres including container yards and support areas. The project will restore and strengthen 2,667 linear feet of wharf and 83.5 acres of yard space. This project will strengthen facilities, allowing for larger ships and densification of container space, enabling continued growth in cargo volumes and international trade. In 2019, Port Houston was the fastest growing container port of the U.S. top 10 container ports.