The alliance said it initially plans deploy up to 175 container ships with capacities ranging from 4,200 TEUs to up to 18,000 TEUs on its trans-Pacific network with the strongest East and Gulf coast port focus seen in years. 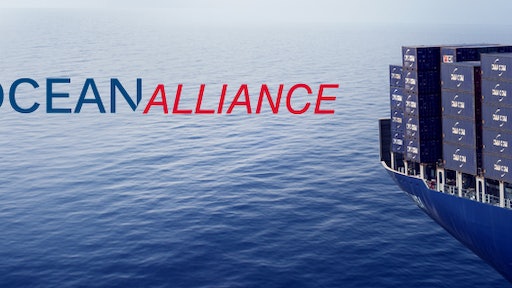 The Ocean Alliance in April plans to deploy ships with capacities of 18,000 20-foot-equivalent units on the trans-Pacific trade, the largest ever seen by U.S ports, and isn’t ruling out bringing even larger ships, according to Journal of Commerce.

The alliance said it initially plans deploy up to 175 container ships with capacities ranging from 4,200 TEUs to up to 18,000 TEUs on its trans-Pacific network with the strongest East and Gulf coast port focus seen in years. Ocean Alliance members CMA CGM, China Cosco Shipping, Orient Overseas Container Line and Evergreen Line said they could ultimately deploy up to 220 ships on the U.S. trades and introduce 21,000-TEU ships to the trade, according to a major vessel-sharing agreement filed with U.S. maritime regulators.

By pooling cargo on larger ships sailing to the U.S., the Ocean Alliance aims to mitigate overcapacity and gain the economies of scale needed to compete with the 2M Alliance of Maersk Line and Mediterranean Shipping Co., and possibly Hyundai Merchant Marine and THE Alliance. The latter includes MOL, NYK Line, "K" Line, Hanjin Shipping, Hapag-Lloyd and Yang Ming Line.