Cargo volumes at the Port of Los Angeles increased nearly 11 percent in May compared to the same period last year, marking the busiest May in the Port’s 109-year history. 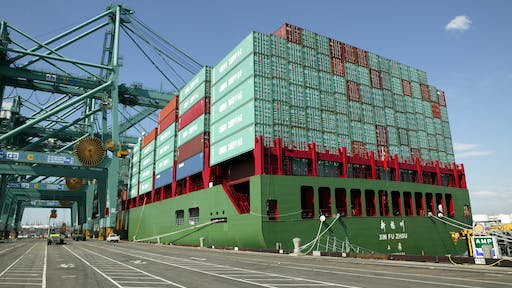 The Port of Los Angeles posted its busiest May ever, while container cargo at the Port of Long Beach also improved in May. Both ports are recovering following last year’s labor problems.

Cargo volumes at the Port of Los Angeles increased nearly 11 percent in May compared to the same period last year, marking the busiest May in the Port’s 109-year history. Total volumes registered at 770,409 twenty-foot equivalents (TEUs), with container growth of 8.7 percent for the first five months of 2016 compared to last year.

“The strong growth both on the import and export side is encouraging as we continue to explore ways to improve supply chain efficiencies,” said Executive Director Gene Seroka. “The unwavering efforts of our supply chain partners, including organized labor, has had a significant impact on our success.”

Through May, total 2016 cargo volumes are 3,457,569 TEUs, an increase of 8.7 percent compared to the same period in 2015. Current and past data container counts for the Port of Los Angeles may be found at: http://www.portoflosangeles.org/maritime/stats.asp.

Container cargo numbers improved slightly at the Port of Long Beach in May, rising 0.8 percent compared to the same month last year when the docks were still busily catching up after several months of congestion.

With cargo volumes near all-time peak levels, May’s 640,566 TEUs (twenty-foot equivalent units — a standard industry measure for containerized cargo) qualified the month as the second-busiest May in the port’s 105-year history.

The port’s numbers are in line with trends observed by the National Retail Federation (NRF), which reports that inventories remain high for U.S. stores and warehouses, muting demand for oceangoing trade.

Editor's Insight: The revival of West Coast port activity is a positive sign following the congestion problems caused by labor issues last year. The West Coast ports may be gaining some of the business they lost to East Coast ports.

Looking to the future, the Panama Canal expansion is expected to drive more trade to U.S. ports.

The Trans-Pacific Partnership, which the U.S. and Japan have not signed, could bring the greatest boost of all to U.S. exports, but prospects for this are not encouraging at present. 6-16-16 By Elliot Maras