About 200 trucks were waiting in half-mile lines outside the gates of the Port Newark Container Terminal and Maher terminals on Monday. 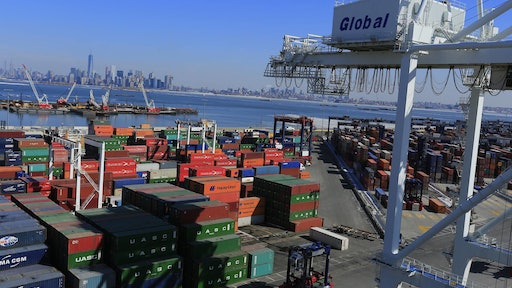 With about 60,000 containers passing through the port’s terminals each week, even small delays can cost retailers, manufacturers and other importers thousands of dollars.

The Port of New York and New Jersey was clogged with unusually high truck traffic Monday morning, when container terminals reopened following a labor stoppage on Friday, according to The Wall Street Journal.

About 200 trucks were waiting in half-mile lines outside the gates of the Port Newark Container Terminal and Maher terminals, said Tom Adamski, who runs a truck depot in Newark for First Coast Logistics Services.

By the afternoon the delays had cleared up, said Ivo Oliveira, vice president for industrial relations at Maher Terminal. “Things have subsided by now,” he said.

The morning delays were adding up to an hour to the time needed to transport a container from the docks to a yard or warehouse, he said. With about 60,000 containers passing through the port’s terminals each week, even small delays can cost retailers, manufacturers and other importers thousands of dollars.

Members of the International Longshoremen’s Association, the East Coast dockworkers’ union, walked off the job Friday morning in what a union spokesman described as “a unified action” against the Waterfront Commission of New York Harbor, a bi-state body that investigates corruption and regulates hiring practices at the port. The ILA said that the commission has interfered in union hiring and harassed union officials.

Waterfront Commission officials denied the accusation and said the walkout was illegal under the union’s contract with port management.

The walkout was resolved Friday afternoon and union members returned to work for shifts starting at 7 p.m. that evening.

But truck drivers, who aren't members of the ILA, had already lost a full day of work, and most terminals aren’t open to truckers on weekends. One smaller container terminal in Bayonne did open its gates on Sunday.

Area terminals had already closed for several days last week in the aftermath of a blizzard that brought transportation to a halt across the Northeast.