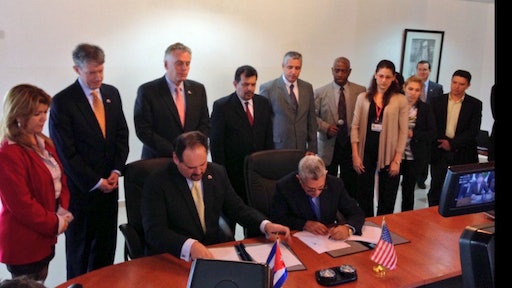 Virginia's port authority will become the first U.S. port operator to sign a cooperation agreement with its Cuban counterpart, in an effort to increase trade and establish direct service with Cuba, Virginia's governor said on Monday, according to Reuters. "We are going to sign an agreement tomorrow between the Port of Mariel and our Port of Virginia which will be a strategic alliance," Virginia Governor Terry McAuliffe said during a three-day trip to Cuba.

Virginia's sales to Cuba, hampered by U.S. sanctions that bar Havana from credit, dropped to $25 million in 2014, Virginia Secretary of Agriculture and Forestry Todd Haymore told Reuters, echoing a call by the governor to allow bank credit for the food trade. He said the delegation, which includes representatives from pork producer Smithfield Foods and poultry producer Perdue Farms, hopes to increase and diversify Virginia's exports to Cuba, which consist primarily of apples, wine and soy products.

Editors Insight: The momentum for expanding trade with Cuba continues to build. There is a lot of food and beverage business at stake as Cuba warms to trade with the U.S. and as trade restrictions ease in both countries.

Cuba does not want to miss out on the trade boom the expanded Panama Canal will unleash. Establishing partnerships with U.S. trade partners will help Cuba cash in on this trade.

U.S. exporters have been missing out on the estimated $2 billion Cuban imports business due to the U.S. trade embargo. Given the Port of Virginia’s investment in Cuba and other U.S. investments, the embargo’s days appear to be numbered.