This operation is part of a continued effort to interrupt what CBP calls “an extensive network of purposely mislabeled and high-risk agriculture products coming from Hong Kong, China, India and Saudi Arabia.” 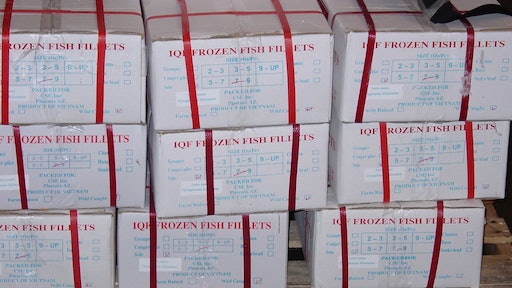 Boxes of frozen fillets of catfish of the genus Pangasius -- called basa, swai or sutchi -- that were imported into the United States from Vietnam falsely labeled as sole to avoid anti-dumping duties.

U.S. Customs and Border Protection (CBP) reports that agriculture specialists at the port of Cincinnati recently conducted an 8-day special operation highlighting the increasing trend of customers using e-commerce to purchase illegal agriculture products from Asia, according to Sandler, Travis & Rosenberg, P.A., specialists in customs and international trade law. This operation is part of a continued effort to interrupt what CBP calls “an extensive network of purposely mislabeled and high-risk agriculture products coming from Hong Kong, China, India and Saudi Arabia” and destined for locations such as ethnic restaurants, food stores and private residences.

According to CBP, this operation yielded 1,104 inspected shipments, 73 shipments returned to origin, 198 emergency action notifications, four mis-delivery penalties and 98 mis-manifesting penalties netting a total of $98,000 in fines. Additionally, CBP destroyed over 900 pounds of contraband from 146 shipments and found 10 pest interceptions.