Florida members of the House Transportation and Infrastructure (T&I) Committee participated in a panel to discuss the benefits of the historic, bipartisan legislation signed into law by President Obama, in June 2014. 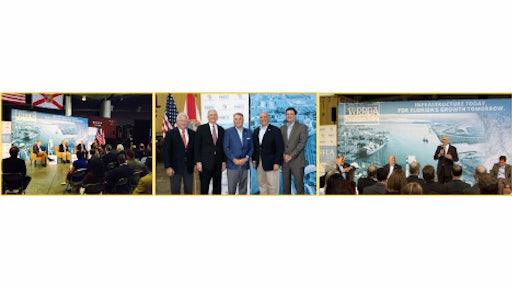 Florida members of the House Transportation and Infrastructure (T&I) Committee participated in a panel to discuss the benefits of the historic, bipartisan legislation signed into law by President Obama, in June 2014.  Port President and CEO Paul Anderson led the discussion, saying that this key WRRDA legislation is critical in helping to improve the nation’s port infrastructure, thereby creating a transportation chain that will be globally competitive and enable future generations to reap economic benefits and build a healthier platform for trade and commerce.

Elected officials on the panel were Congressman Daniel Webster and Congressman Steve Southerland, as well as Florida Ports Council’s President Doug Wheeler. The panel spoke before an audience of about 150 stakeholders, who represent a diverse port community, Hillsborough County Schools, and influential economic development groups, such as the Tampa/Hillsborough Economic Development Corporation and Enterprise Florida. Also in attendance were senior officials from the Florida Department of Transportation, a key strategic partner of Florida’s seaports.

Anderson touts the bipartisan efforts and the tireless work of Congress, including the Florida Congressional delegation, to come to a winning conclusion.

“Today’s event was outstanding, and we are very grateful to all attendees for their ongoing support of critical infrastructure initiatives such as WRRDA. It’s because of the forward thinking of our Florida Congressional delegation, working in tandem with the port industry and our state, that we were able to see the historic signing of WRRDA into law,” Anderson said. “Today is all about celebrating that tremendous step toward our future as a nation and acknowledging the exemplary bipartisanship that went into this important process to affect needed change.”