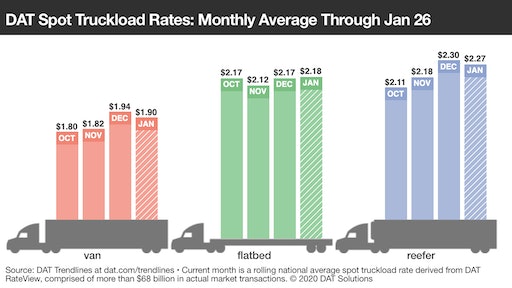 Spot load-to-truck ratios for all three equipment types fell during the week ending Jan. 26, and truckload rates for vans and reefers drifted lower as shippers had little trouble finding trucks to haul their freight, reported DAT Solutions, which operates the industry’s largest load board network.

This current lull may be shorter than expected but for now conditions on the spot market favor shippers and demand a creative approach from truckers.

The national average spot van load-to-truck ratio slipped from 2.1 to 1.6 on neutral van volumes compared to the previous week. For the second straight week, the average van rate was lower on nearly all of DAT’s top 100 van lanes, and rates were higher only on lanes where pricing tends to be weak.

The good news is carriers can almost always find van loads in big Southeast retail freight hubs. The bad news is it's hard to find lanes between these markets that pay well right now. For example, Memphis to Charlotte fell 14 cents to $1.95 a mile last week, while the return trip lost 9 cents to $1.45.

A Memphis-Charlotte round trip averaged $1.76 per loaded mile last week for a total of $2,166. The three-legged route through Macon averages $2.05 a mile, which at that rate would earn the carrier $2,806 while adding 136 paid miles to the trip. Depending on the driver’s hours of service, triangular routing may be a good choice in a tough rate environment.

This is a quiet period for reefer freight, which is closely tied to domestic produce harvests. The national average reefer load-to-truck ratio was 3.8, down from 4.9 the previous week. As a result, the average spot rate fell on 71 of DAT's top 72 reefer lanes by volume. The sole riser was Grand Rapids, Michigan, to Madison, Wisconsin.

Produce imports from Mexico and at some seaports tend to populate the spot market but many of the loads coming through these ports of entry are scheduled and moving under contract. Plus, there are lots of trucks available in those markets.

As a result, the average spot reefer rate fell on 71 of the top 72 reefer lanes by volume. The sole riser was Grand Rapids, Michigan, to Madison, Wisconsin.

These rates are based on RateView, DAT's database of $68 billion in annual market transactions. As the industry standard in truckload pricing, DAT’s freight rate database also provides the settlement prices against which trucking freight futures contracts are traded. Rates are averages from last week and this week could be different. Negotiate the best deal you can get on every haul.