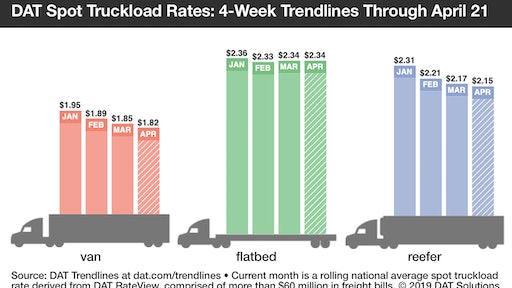 The number of load posts fell 13 percent last week and activity on the spot truckload freight market tapered off significantly as Easter weekend approached, says DAT Solutions, which operates the DAT network of load boards. The number of trucks posted was virtually unchanged compared to the previous week, and with less freight available, rates slumped on lanes across much of the country.

Van and reefer rates declined despite a 3-cent rise in the national average price of diesel, which was $3.15 a gallon last week. Spot rates include a fuel surcharge portion.

Rates were up on 42 of the top 100 van lanes week over week. The van load-to-truck ratio peaked on Tuesday at 1.8 loads per truck and skidded to 0.8 by Good Friday as shippers and receivers curtailed their activity for the holidays. Van freight volume last week is actually 11 percent higher year over year.

Markets to watch: Los Angeles and Denver had higher average outbound rates, but those were the only standouts. Just a handful of lanes had double-digit rate increases compared to the previous week, including:

All major van markets lost volume as many shippers and receivers ran on a reduced schedule on Good Friday. In general, demand and rates were weakest in the Northeast and parts of the Midwest. Buffalo to Charlotte dropped 20 cents to $1.93/mile, while Chicago to Denver fell 15 cents to $2.29/mile.

Flatbed volume has slowed after a strong first quarter. Weather appears to be a factor, as well as reduced oil production in West Texas.

On the bright side, recovery from flooding in the Midwest is creating opportunities to move heavy equipment and construction supplies. And with produce season under way, onions, potatoes, and melons can be moved short and intermediate distances in open-air containers on flatbeds.

Flatbed rates increased on major lanes from Houston, Los Angeles, and Las Vegas. Among them: