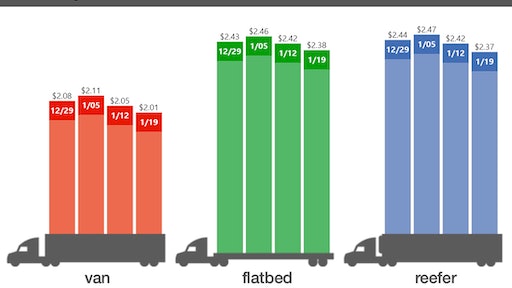 Truckload capacity continues to build in the first weeks of 2019, and national average spot rates for dry van, reefers, and flatbeds continue to decline.

In a typical seasonal slump, the number of trucks on the spot truckload freight market increased 7.4 percent while the number of loads dipped 10 percent during the week ending Jan. 19, said DAT Solutions, which operates the DAT network of load boards.

Van truck posts on DAT load boards increased 8 percent compared to the previous week, while load posts declined 13 percent. That caused the van load-to-truck ratio to drop 19 percent from 4.6 to 3.7 loads per truck.

The worst drops in rates in the past month have been from the West Coast, where average outbound spot rates from Los Angeles and Seattle are down double digits since December. This is not unexpected, as the threat of higher tariffs pushed higher ocean volumes to U.S. shores during Q4 2018.

Average spot rates were down on several key regional reefer lanes and major markets across the country.