The sudden rise of Hurricane Michael had a dampening effect on freight movement in the Southeast last week and contributed to a 13 percent overall drop in load posts on the DAT network of load boards. 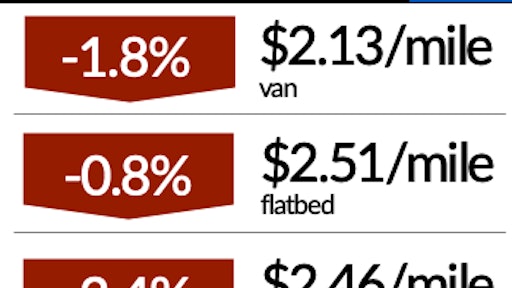 The sudden rise of Hurricane Michael had a dampening effect on freight movement in the Southeast last week and contributed to a 13 percent overall drop in load posts on the DAT network of load boards.

With weaker demand and the number of available trucks up 2 percent during the week ending Oct. 13, national average load-to-truck ratios plunged for all three equipment types:

The national average price of on-highway diesel rose another penny last week to $3.39 per gallon.

Spot van load posts fell 15 percent on DAT load boards and truck posts increased 1 percent. Average spot truckload rates fell on 70 of the top 100 van lanes on DAT load boards. Notably, average spot prices out of Atlanta ($2.32/mile) and Charlotte ($2.45/mile) were neutral despite all the canceled shipments from there to Florida.

With Hurricane Michael approaching swiftly, shippers, brokers, and truckers in the Southeast rushed to get reefer freight out ahead of the storm. Volumes were up 48 percent out of Lakeland, Fla., and rates rose 5 percent. Key lanes:

Aside from that Green Bay lane, other Midwest reefer lanes retreated from the peaks of recent weeks. The region still has some of the highest prices in the country, despite sharp drops in the rates out of Chicago ($3.06/mile, down 15 cents) and Grand Rapids ($3.56/mile, down 9 cents).