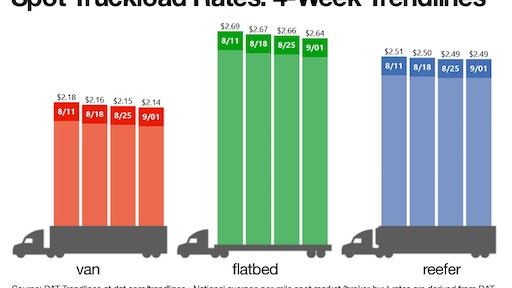 Nuts, onions, and potatoes are contributing to high load-to-truck ratios in Oregon and eastern Washington. In the Midwest, the average outbound reefer rate in Chicago was up 18 cents to $3.37/mile last week and has risen 12 percent in the past month.

Oil and gas activity is having an impact. Drilling in the Permian Basin has slowed and demand for trucks has cooled out of Houston ($2.99/mile, down 2 cents), the largest flatbed market in the country and the top market supplying Midland and surrounding counties.

Regional van markets like Dallas and Memphis—which send freight to Houston—seem to be impacted by the slowdown in oil drilling as well.