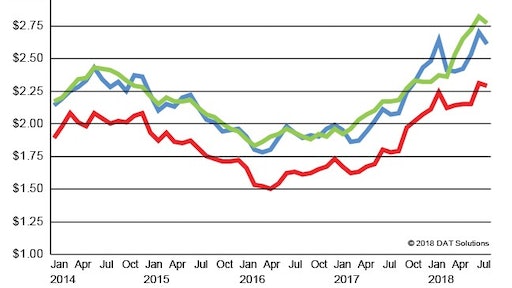 Spot truckload freight volume fell 29 percent month-over-month but increased 3.4 percent compared to July 2017. The decline brings freight levels in line with July volumes in 2017 and 2014, the previous record-holders on the DAT Freight Index

"Spot market rates did not drop as much as we would expect in July,” explains Mark Montague, pricing analyst at DAT. “Going forward, rate trends are likely to follow a normal seasonal pattern but at a level that’s 25 to 30 percent higher than in 2017."