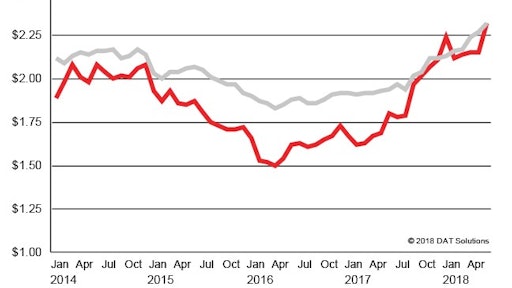 Demand for truckload shipments faced off against capacity shortfalls, boosting truckload rates to new heights on the spot market in June, according to DAT Solutions, which operates North America’s largest load board marketplace.

“While contract rates typically rise after a sustained increase in spot market rates, there is usually a lag of four to six months. This year, that lag time is reduced to a few weeks,” Montague explains.

Contract rates increased 19 percent for vans compared to June 2017, but spot market rates rose by 29 percent during the same period.

Spot reefer and flatbed rates both exceeded the comparable contract rates, as reefer rates rose 16 cents to $2.69 and flatbeds added 10 cents to $2.82, compared to the national averages for May.