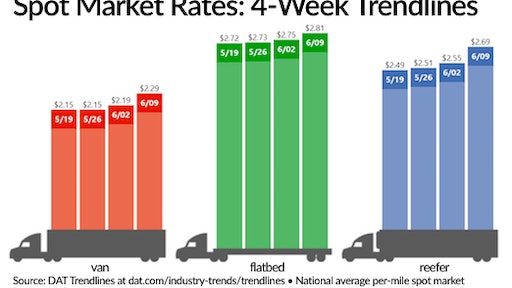 Spot truckload rates jumped sharply during the week ending June 9 as the number of loads on DAT load boards increased 27 percent while truck posts fell 0.4 percent. Higher demand for capacity during a week that included the annual Roadcheck inspection blitz helped drive up rates in all three equipment types:

While spot truckload rates typically increase in June, the van rate gained 16 cents last week and the reefer rate was up 15 cents compared to May averages. National average van and reefer load-to-truck ratios were the highest they’ve been since rates spiked in January, following the ELD mandate.

California reefer pricing continues to improve, with rates up 25 percent during the past month out of Sacramento. In Florida, the origin of loads has shifted to the middle and upper parts of the state. As a result, Miami averaged $2.36/mile, down 11 cents, and the Miami to Atlanta lane is falling into off-season pricing: the average rate fell 26 cents last week to $1.72/mile.

Numerous companies in cold chain logistics have hired new personnel, but unfortunately one company sadly says goodbye to a veteran of the industry.
October 13, 2020
Follow Us