Index falls 14 percent, but this was the second-strongest February in 20 years. 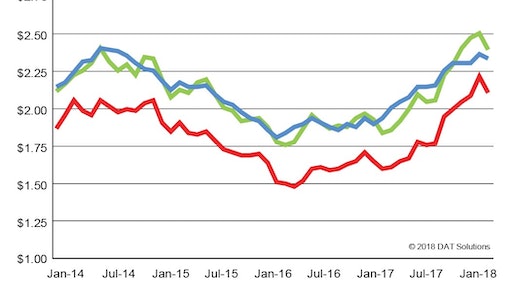 Spot truckload freight volume and rates declined seasonally in February, which is typically the slowest month for freight, according to DAT Solutions, which operates North America’s largest load board marketplace.

The national average spot van rate was $2.13 per mile in February, down 11 cents compared to January but 52 cents higher than February 2017.

At $2.42 per mile, the national average spot reefer rate was 22 cents lower month over month and 56 cents higher compared to February 2017. The spot rate for reefers exceeded the average contract rate for the sixth consecutive month, indicating extraordinary pressure on reefer capacity nationwide.

The national average flatbed spot rate was $2.36 per mile, 1 cent lower than the January peak, and 40 cents higher year over year. The spot rate for flatbeds matched the average contract rate in February.

Increased volume at the end of the month and the first few days of March signaled an early start to the spring freight season.

“We expect rates to rebound well before the end of March,” said DAT industry analyst Mark Montague. “The end of the month and quarter coincide with Easter weekend as well as the start of the full penalty phase of the Electronic Logging Device mandate on April 1. Shippers will want to move freight ahead of these key dates, and the additional demand will intensify the strain on capacity, driving rates up.”